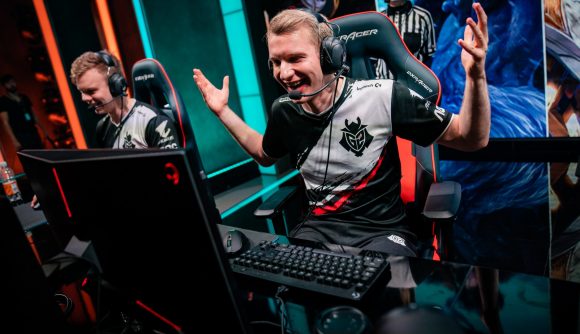 The rivalry between European and North American League of Legends teams is down to their previous inability to defeat Asian opposition, according to G2’s Marcin ‘Jankos’ Jankowski.

The Polish jungler, who was being interviewed by Tarvis Gafford on his YouTube channel, said that NA and EU teams in the past “had to s***-talk each other” and create rivalries due to both regions not being able to win against teams from Asia. However, Jankos goes on to say that in recent times that’s all changed and that Worlds 2019 will be one of the first tournaments for a long time where both NA and EU teams “can actually defeat the Eastern teams.”

“There’s always competition between NA and EU,” Jankos explains in the interview. “We could never defeat Asian teams so we had to s***-talk each other, but now it seems that both NA and EU can actually defeat the Eastern teams which I’m really happy with because, finally, League is competitive [for teams from all regions].”

Jankos also cites last year’s Worlds semi-final between Fnatic and Cloud9 as one of the turning points, saying that in previous tournaments there would have been little chance of two teams from NA or EU playing each other in a semi-final.

G2 came into the group stages of Worlds as one of the favourites and are looking to become the first Western Worlds champion since the very first World Championships eight years ago in 2011, when Fnatic won the title.

Every Worlds winner since then has hailed from Asia, with teams from South Korea, China and Taiwan all being crowned champions.

Jankos also touches on a few other topics in the interview, including how EU teams may feel the pressure of a home crowd and how fans should show support and cheer for every team at Worlds, no matter their region.