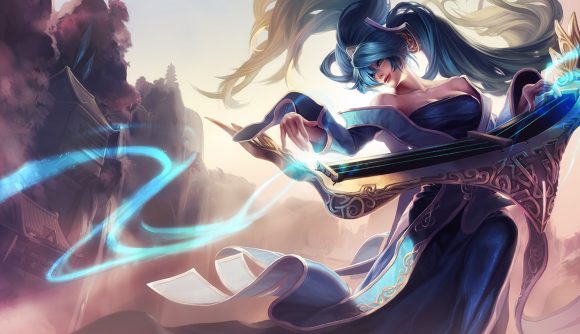 League of Legends Patch 10.4 released just earlier this week but Riot Games has already released a hotfix update to ensure that the original goals are met. Mostly, the patch has focused on the current issue of enchanter supports being played top as both Soraka and Sona have been terrorising bruisers and juggernauts with unlimited poke and sustain.

Riot tried to encourage Sona to return to support by offering her bonus mana whenever she tags an ally with one of her auras. However, she still turned out to be too powerful top as she currently has an outrageous win-rate of 63.17% on the Korean server according to OP.GG.

To tone her down, Lead Gameplay Designer Mark ‘Scruffy’ Yetter has revealed that Sona has had her base AD reduced from 49 to 45, her AD per level down to 2 instead of 3 and the movement speed boost on her E, Song of Celerity, now only offers 10-14% rather than 20%.

Meanwhile, Riot seems to be more content with Soraka’s power in the top-lane now as the healer had proven to be extremely powerful in pro play. Yet, the nerfs also hit Soraka a little too hard in her original position of support.

To combat that, the Starchild now has her heal, Astral Infusion, on a six-second cooldown in the early game rather than eight seconds with a higher mana cost early but a lower cost as the game goes on. On top of that, the health cost reduction when rejuvenated, which was recently added, will now be even stronger early with a 60% reduction rather than 40%.

Some hotfixes coming today for 10.4 to make sure everything ends up as intended. We expect to sometimes have to follow up on changes and want to react quickly.

Though Spellthief’s Edge could continue to be abused outside of the support role so Scruffy says Riot is waiting for the next patch to tackle the issue long-term.

And finally, that leaves the Bami’s Cinder set of items. Bami’s Cinder, as well as Cinderhulk, Sunfire Cape and Forgefire Cape, was given a new passive called Immolate which allows champions to deal AoE damage around them when using an immobilising ability every 10 seconds.

The new passive on the tank items has already proven to be too strong. As a result, the cooldown has been increased to 12 seconds and the bonus HP damage has been decreased by 1%. One of the strongest users of the item is Ornn who has proven to be the best tank in the game by a country mile. The top-laner has been hovering around a 51% win-rate for a while and has repeatedly frustrated players in high-elo but for now, Riot has decided not to nerf him.