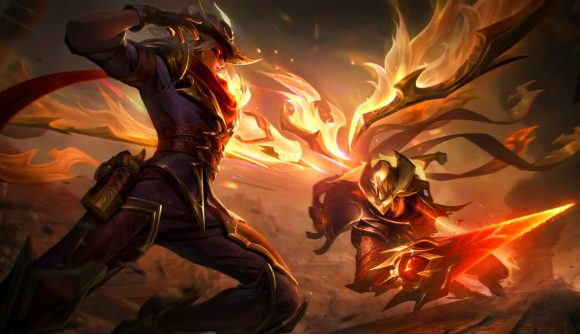 League of Legends and battle passes: name a more consistent duo. With the 2022 Mid-Season Invitational well underway, developer Riot Games has announced its latest pass – which will run throughout the event – will be High Noon-themed. Not only that, but Riot says it will offer up some of the proceeds from the pass to the MSI 2022 prize pool.

The new battle pass was announced in a blog post from Riot Games. “With the 2022 Mid-Season Invitational off to a heated start,” the post says, “we’re excited to announce in-game content you can purchase to support your favourite teams and show off your fandom!”

The MSI High Noon Event Pass will cost 1650 RP for the base pass, or 2650 RP for the pass bundle. Riot has stated that 25% of the revenue generated by the battle pass will go towards the overall MSI prize pool. Riot has also said that while there won’t be a Conqueror skin on sale this year, it will be contributing 25% of the revenue generated by the High Noon Talon skin to the MSI prize pool.

“We’ve been looking for fresh ways to reward and support the teams competing at international events,” the company says in the post. “And we hope that by offering a revenue share on more champion-agnostic content, like the MSI event pass, we can unlock more ways for fans to contribute to their favourite teams.”

Additionally, all revenue generated from MSI team icons will go directly to the relevant team organisations.

The High Noon Event Pass and MSI team icons are available via the League of Legends client now.