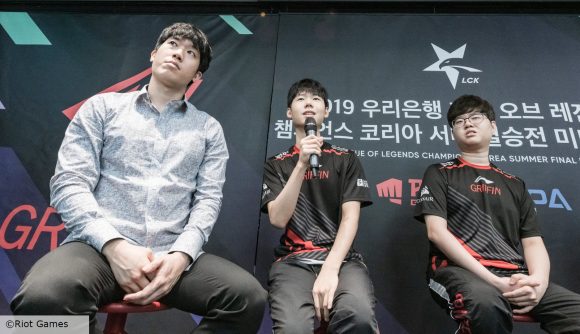 One of Korea’s biggest League of Legends teams has been dealt a massive blow just weeks before the World Championships begin after announcing their head coach was stepping down.

Kim ‘CvMax’ Dae-Ho ended his contract with Griffin on September 26 by mutual agreement. He helped guide the team to first place finishes in both the Spring and Summer Splits of the LCK this year. The team finished second in both of the resulting playoffs, losing out to LoL heavyweights Sk Telecom 1 on both occasions.

Griffin will have been deep into preparations for Worlds. The team’s first group stage match was set for October 13 against tournament favourites G2 Esports in Group A. It is a huge shock to see a coach that has brought the team so much success leave at such a pivotal time. The departure will leave many wondering if the Koreans will be able to make it out of what is already a tough group.

We currently don’t know the exact reasons why CvMax’s contract has been mutually ended, but Griffin said in the announcement tweet that the decision came as part of “Griffin’s new journey.” This would hint that the team parted ways with CvMax in an attempt to bring in a new style of coach, which is a daring and risky tactic this close to the biggest esports event of the year.

Hello. This is Team Griffin.

For Griffin’s new journey, the contract with coach Kim Dae-Ho (cvMax) has ended with mutual agreement. We sincerely thank coach cvMax for his time with Team Griffin. Thank you. pic.twitter.com/FVR1RiOxF6

In Group A, Griffin faces not only tournament favourites G2, but also second seed from the LCS, Cloud9, as well as a fourth team who will be determined through the play-ins.