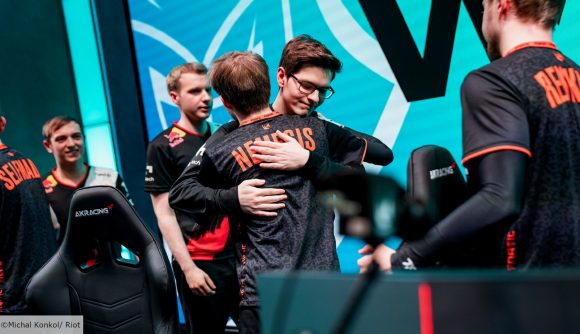 In what was 2020’s first bumper esports weekend – which saw big matches and tournaments across League of Legends, Call of Duty, Overwatch, Rocket League, and more – it was the LEC that came out on top as nearly half a million viewers tuned in to watch Worlds runner-up G2 take on Fnatic.

G2 and Fnatic, who are widely billed as the European league’s top teams, pulled in a peak audience of 475,000 across all platforms (excluding Chinese streaming services) according to Esports Charts. G2 continued their dominant and unbeaten start to the 2020 Spring Split by taking down Fnatic to go 6-0 so far, while Fnatic joins MAD Lions, Origen, and Misfits in joint second with a 4-2 record. According to Fnatic’s CEO Sam Mathews, this was the highest peak audience ever for a regular season LEC match by some 100,000 viewers.

In second place, the clash of two juggernauts of CS:GO – Na’Vi and Astralis – in the BLAST Premier Spring Series drew in 390,000 viewers. Another League of Legends tournament also claims the third spot, with the LCS achieving a peak of 294,000 for Team SoloMid vs Golden Guardians.

I think our rivalry with @G2esports is advancing global LoL.

475k viewership peak, is more than any game of LEC 2019 by 100k of regular season both spring and summer, and matched spring final.

This weekend also saw a number of other big esports competitions get under way. Season 9 of the Rocket League Championship Series kicked off belatedly after it’s scheduled launch weekend was called off due to server issues, and the 2020 Overwatch League also began with homestands in Dallas and New York.

The Call of Duty League also saw its first Home Series event of the season in London, which was won by the Chicago Huntsmen, and there was more Rainbow Six Siege action at the Six Invitational.

Here’s a look at the biggest matches and events of the weekend (February 8-9).

There may be early concerns for Activision Blizzard, however, after both the CDL and OWL achieved lower peak viewership than the likes of the Six Invitational and RLCS. For 2020, Activision Blizzard signed an exclusivity deal with YouTube which would see all CDL, OWL and Hearthstone esports coverage be shown on the platform, taking the tournaments away from Twitch.

After so much action getting crammed into a single weekend, it’s safe to say that the esports year is now certainly underway.