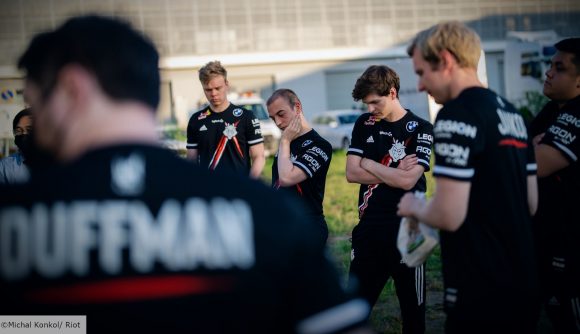 After its shock failure to qualify for the League of Legends World Championship this year, G2 Esports will undergo a massive transformation over the offseason, according to CEO Carlos ‘ocelote’ Rodriguez. Three of its star players have been benched and will look to be sold, as has G2’s head coach, strategic coach, and all other related support staff.

The three players to be leaving the G2 roster are toplaner Martin ‘Wunder’ Hansen, AD carry Martin ‘Rekkles’ Larsson, and support Mihael ‘Mikyx’ Mehle. While Rekkles was acquired from LEC rivals Fnatic prior to the 2021 season, Wunder and Mikyx have been long-standing and integral members of the G2 for a number of years.

As well as the players, the coaching staff is being completely overhauled too. Head coach Fabian ‘Grabbz’ Lohmann and strategic coach Sng ‘Nelson’ Yi-Wei are also on their way out of the organisation. While roster changes were heavily rumoured and reported following the conclusion of G2’s disappointing season, the scale of the exodus is surprising.

“We have decided to bench, and will look to trade, Wunder, Mikyx, Rekkles, Grabbz, and Nelson, and look to also replace the rest of the support staff,” ocelote says. “[It was] tough to come to this conclusion, we love every single one of the people who will no longer be with us going forward, and their work with us has been incredible.”

With all of these players and staff now benched, G2 is looking to sell those still in contract to other organisations. ocelote explicitly says G2 will “not block any trades” for the players in question.

For the 2022 season, only midlaner Rasmus ‘Caps’ Winther and jungler Marcin ‘Jankos’ Jankowski will remain. Dot Esports reported last month that the former had signed a one-year contract extension with G2.

With G2’s only target for its League of Legends team being to win Worlds, failing to qualify for this year’s tournament was always going to spark change. However, very few predicted the change would be this drastic.