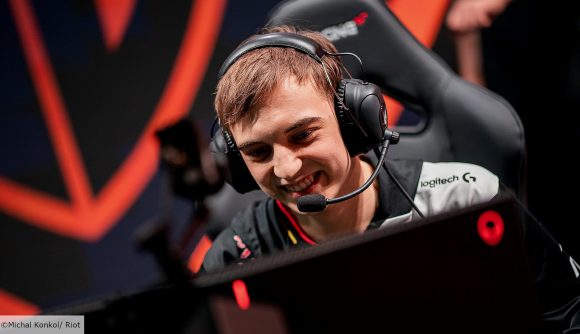 When it was revealed that G2’s Luka ‘Perkz’ Perkovic would be giving up his spot as ADC to swap roles with mid laner Rasmus ‘Caps’ Winther, many were surprised. After all, the team came one match away from a faultless grand slam last year. Why try and fix something that isn’t broken?

However, after Caps’ impressive display on bot lane during the opening weekend of the LEC, it appears to be a stroke of genius. Caps went so hard into his new role that his debut game against MAD Lions actually set a new record for ADCs across the top five leagues in competitive League of Legends.

An intrigued Reddit user, ‘HiderDK’ delved into the archives to compare Caps’ debut with other huge performances from ADCs. What he discovered is that Caps had, in a statistical sense at least, played only the second ever ‘faultless’ game in that role. By faultless, we mean that he had a 100% kill participation with 9 kills and 12 assists, and went the entire game without dying. The only other player to have ever done this is Cloud9’s Zachary ‘Sneaky’ Scuderi, who posted an 8/12/0 game in the 2016 NA LCS Summer Split.

In Caps’s first game as an ADC he became the first player in a major league to have 100% kill participation, 21 or more kills+assists and 0 deaths. from r/leagueoflegends

Caps’ performance in fact eclipsed Sneaky’s as he achieved one more kill than the American, meaning he has set a record as having the most faultless ADC game ever in the top five leagues (since the stats began in 2014).

As HiderDK’s chart of players with 100% kill contribution shows, other ADCs have managed to post higher numbers of kills or assists, but only Sneaky and Caps have achieved the feat without being eliminated.

If Caps is setting records on his ADC debut, who knows what other benchmarks he might lay down in the coming weeks of the LEC.