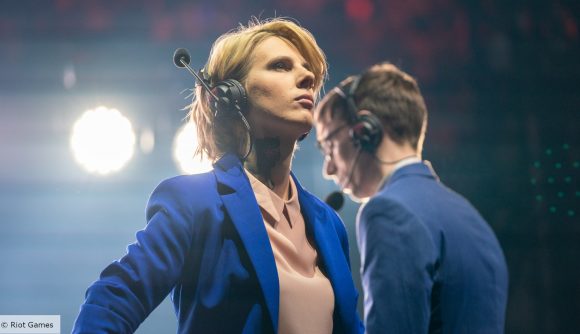 Indiana ‘Froskurinn’ Black has announced that she has not re-signed with the League of Legends European Championship for the 2021 season. The commentator has been a staple of the LEC broadcasts since its rebrand in early 2019. She is known for her brutal honesty and critical analysis at LEC matches and beyond.

Before moving over to the European side of things, Froskurinn was a colour commentator for the English-language LPL streams, starting from casting a community-organised bootleg stream and going on to achieve great success on the biggest stages.

Froskurinn has been a prominent feature at the League of Legends World Championships, most recently colour casting and providing analysis for the English-language broadcast of LoL Worlds 2020. However, Froskurinn started her LoL career in a coaching capacity, working with the likes of Robert Morris University Illinois, Roar, and Team Dignitas EU. It seems from her tweet that she might once again head towards the coaching side of the esport.

“I’ve always felt strongly about moving into management and development positions,” Froskurinn says in her tweet, which announced her departure from the LEC broadcasting team.

I have decided not to re-sign with the LEC for the 2021 season. I cannot reveal the next steps yet, but I've always felt strongly about moving into management and development positions. I wish the LEC broadcast, teams, and fans the very best. I absolutely loved it there.❤️

League of Legends fans from Europe and beyond are incredibly excited to see what her next steps are, and many EU teams replied to her tweet expressing their best wishes to her.