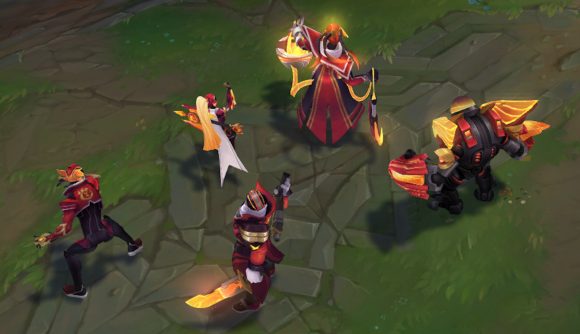 It’s been four months since FunPlus Phoenix destroyed G2 Esports in front of a packed arena in France, but we’ve finally got a glimpse of the team’s League of Legends World Champion skins.

Riot Games showed off the new Lee Sin, Vayne, Thresh, Malphite and Gangplank skins today, which according to the latest developer blog will be making their debut on the PBE soon. The skins will cost 1,350 RP each and will include new textures, new VFX and SFX for all spells, a new spawn in and respawn animation and new recall animations.

The recall animations were designed with the help of the FPX players and all five skins feature a fiery design and bird-like masks to remind you exactly who the 2019 Worlds champions really were. Like previous Worlds skins, the animations also feature the players’ autographs.

“When we initially interviewed the FPX players after Worlds, they wanted something fun, something to capture the spirit of their team, and most of all, something that shows just how close of a team they all were,” Riot Games says.

“To represent their unity and fighting spirit as a team, the theme that really inspired us for this skin line was the players’ idea of this kind of anime, fighting team that rises from the ashes as a team to become the undying phoenix. We stayed closely in touch with the players from the very early concept stages, showed them our progress a few times, asking for feedback and reacting where we could.

“Every year we celebrate the Worlds winner in different ways. This year we gave each of the FPX skins an exclusive chroma. The main inspiration for the chromas this year is the team jersey itself. We wanted to make it feel like a homage to what they look like on stage. So we took a lot of design, aesthetics and direction from that. The chromas are an alternate version, a darker and edgier version from the parent base skins.”

As popular picks in the competitive scene, Thresh, Lee Sin, and Vayne will prove to be some of the most sought after skins following their release, although we can’t help wanting Kim “Doinb” Tae-sang’s Malphite skin, which he designed for his wife.

The skins are part of patch 10.9, which should move to the PBE shortly. You can find the full details of the patch here, courtesy of our sister site PCGamesN.