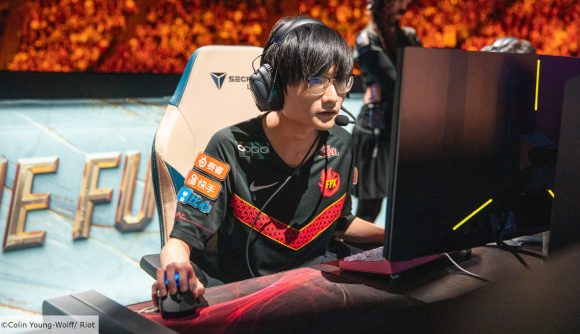 2019 League of Legends Worlds winner Gao ‘Tian’ Tian-Liang has announced just a few games into the 2021 LPL season that he will be taking a break from competing for FunPlus Phoenix. The Chinese player, who was crowned the finals MVP at Worlds 2019, revealed the reason behind his decision in a Weibo post, translated by LPL insider ‘Ran’.

In the post, Tian explains that he clearly hasn’t been happy playing competitive LoL for a while and that the “pressure” is affecting his health.

“Yesterday’s 2-0 against [Rogue Warriors] was one of the few games after 2019 that I actually enjoyed playing. In our last game against EDG, due to pressure, I would suddenly feel unwell. I’m afraid this will happen again in the future. After some discussion with our team, I [have decided] to take a break and seek professional help.” The jungler ends by asking fans to keep up their support for FPX in his absence, but promises that he will return to the roster eventually.

It’s currently not clear who will replace Tian as FPX’s starting jungler. However, the most likely outcome is a promotion for FunPlus Phoenix Blaze academy team player Chen ‘Mingren’ Sheng-Wen, with FPX’s next LPL fixture against Worlds 2020 finalist Suning just three days away.

Translation:
“Yesterday’s 2-0 against RW was one of the few games after 2019 that I actually enjoyed playing. In our last game against EDG, due to pressure, I would suddenly feel unwell. I’m afraid this will happen again in the future…. pic.twitter.com/yQQ0yhswb7

FPX, which bolstered its roster with 2020 Worlds winner Jang ‘Nuguri’ Ha-gwon during the offseason, has started the Spring Split with a 2-1 record, but losing Tian will certainly be a blow in its attempts to rebound from a disappointing 2020 season.