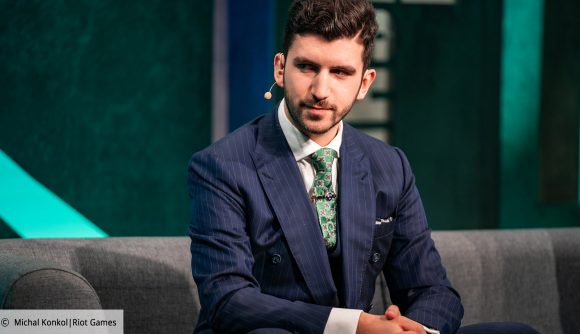 YamatoCannon joined SANDBOX at the end of the 2020 LCK Spring Split, and oversaw an uptick in the team’s form during the Summer Split, progressing from the ninth place finish in Spring to a healthier seventh.

Despite failing to reach the playoffs, SANDBOX was evidently pleased with the work YamatoCannon was doing there, announcing that it had held “optimistic discussions about resigning” the coach for the 2021 LCK season, but the arrangement became untenable due to personal reasons.

YamatoCannon’s return to Europe comes as little surprise, as he has been a permanent fixture in the LEC, both as part of the broadcast team, and indeed behind the scenes as a coach for some time now. He first broke out onto the then-EU LCS stage as the head coach for Team Roccat in 2015, before moving over to Splyce in the same capacity at the end of the season. YamatoCannon led Splyce to Worlds in its very first season as a team in 2016, but failed to make it past the group stages.

Perhaps YamatoCannon’s greatest achievement comes from the exceptional run made while head coach of Team Vitality in 2018, reaching Worlds with a roster playing well beyond the sum of its parts. Under his guidance, Vitality even managed to take games from the likes of China’s Royal Never Give Up and Korea’s Gen.G.

With YamatoCannon returning to the LEC, the future of current Fnatic head coach Alfonso ‘Mithy’ Rodríguez, who took the team to Worlds this year in his first season of coaching, looks uncertain. Wolf speculates that a possible reunion at the LCS’ Cloud9 with Jesper ‘Zven’ Svenningsen, as well as potential new recruit Luka ‘Perkz’ Perković, is on the cards.

Fnatic’s potential return to a veteran coach would see the team take an ‘out with the new, in with the old’ approach to the upcoming season, which could be perceived as a step backwards. However, YamatoCannon revealed to The Loadout during Worlds 2020 that his potential as a coach is “far from completely explored,” suggesting he clearly still has a lot to offer.