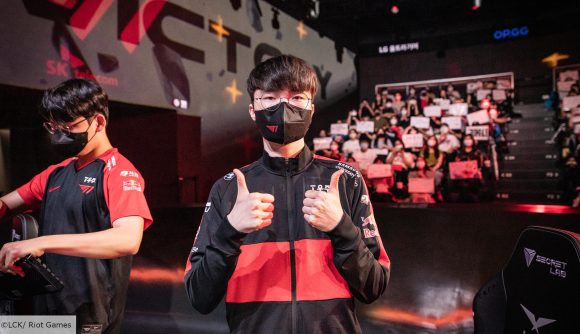 Korean esports organisation T1 has revealed that it has filed a lawsuit against a “small group” of League of Legends fans that have been harassing and insulting iconic midlaner Lee ‘Faker’ Sang-hyeok online.

In 2020, T1 threatened legal action against those making hateful or insulting comments about its players, which escalated after a poor run of performances. Now, in 2022, it’s doing it for real. In a statement issued by Faker and T1’s law firm, Apex Law LLC, which has been translated from Korean to English by Inven Global, the lawyers working on the lawsuit made it clear the situation has become more than serious enough to warrant legal action.

“Despite T1’s repeated requests towards those that leave malicious comments, we found that not only were there more of these comments, but also have gotten more malicious,” a law firm representative says. “The player, the player’s family, and all those around him continue to suffer on a mental level, so we had no choice to file a criminal lawsuit against those that left such spiteful online comments.

“With respect to Faker’s opinion on this matter, we are filing criminal lawsuits only towards those that repeatedly and habitually left such malicious comments, as he felt that these individuals need to be severely sanctioned. As such, there will be no plea nor favourable arrangement deals.”

The specific law that the lawsuit is based around is Article 311 of the Criminal Act, which protects people from public insults. The maximum punishment is up to one year in prison, or a fine of up to two million won (approximately $1,500).

In an additional statement from T1, the organisation says that while Faker accepts “objective assessments of a player’s performance” from fans online, “unjustified criticism and personal attacks isn’t something to be accepted.”

The law firm also gives more details in a Q+A with on-scene reporters. While it says it cannot reveal exactly how many people are being sued in this lawsuit, it is only a “small group” of offenders that have posted the most severe and frequent insults online. These posts apparently included remarks about members of Faker’s family, as well as “unspeakably foul” drawings.

You can watch the full announcement of the lawsuit with English subtitles in the video below from Korizon’s Ashley Kang.

Despite T1 losing just one LCK series all year, and finishing second at MSI 2022, the harassment and online hate directed towards the team and its talisman clearly hasn’t let up.

This decision also comes soon after fellow LCK team KT Rolster spoke out against the harassment and toxicity its players have faced from fans, which included mailing a deadly weapon to its training facility.