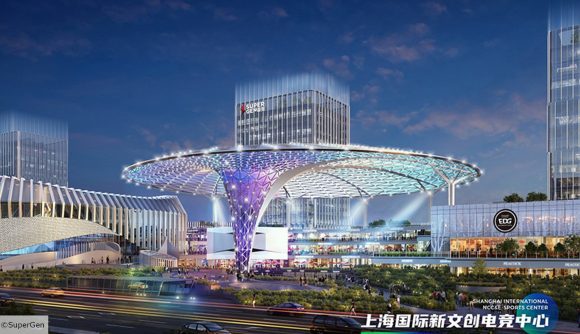 Chinese esports organisation Edward Gaming is to get a shiny new headquarters based in the state of the art Shanghai International Culture and Creative Esports Center. That sounds kinda boring, right? What about if we told you this esports center is going to cost $1.5 billion dollars to build and you can skydive in it? Much better.

Yup, Edward Gaming’s parent company, property giant SuperGen, is forking out $1.5 billion on the project, which will be located in the Minhang District of Shanghai. Construction has already begun on the center, which isn’t going to just be a haven for esports fans but will also feature a number of physical activity venues as well as, of course, a shopping mall.

So, when the work is complete and the $1.5 billion budget has been rinsed, what will you expect to see? Well, EDG’s new headquarters for a start, which will also come with the organisation’s very own esports venue with a capacity of 6,000. There will also be a five-star “esports themed” hotel on the site as well, for weary LAN-goers to rest their heads in convenient luxury.

Aside from esports, there will also be an indoor skydiving centre and a breakdancing facility, according to The Esports Observer. Reports also claim it will feature a diving pool that will be the deepest in Asia.

A digital glimpse at the Shanghai International NCC&E-sports Center!

With a total investment of more than 10 billion yuan, it’ll not only act as EDG’s home venue, but also have facilities such as Asia’s deepest deep diving “pool” (40.4m), the largest indoor skydiving center, etc pic.twitter.com/7mryUtbDRk

Despite all of this being built on a huge 500,000 square metre site, construction should be finished within two years and be ready in 2023.

Once completed, SuperGen hopes the site will be used to hold around 300 international esports events a year. Looks the hotel will be put to good use, then.