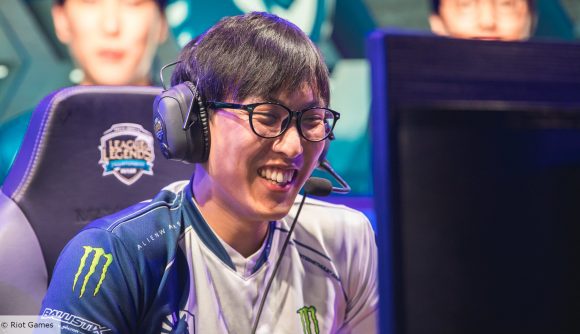 Despite Riot Games claiming that Aphelios, the new League of Legends champion, will have the highest skill ceiling in the game, professional player Yiliang ‘Doublelift’ Peng believes he won’t be that hard to play because he only uses two buttons.

The bot laner, who currently plays for Team Liquid, made the comments during his Twitch stream last night (November 27). He  believes that Aphelios’ five weapons make his abilities “complex” but like Vayne, he won’t be difficult to master.

“A champ that has two buttons can never really be complex,” Doublelift tells his stream, which you can watch below. “He can be complex but he can’t be hard to play. There can be a lot of different micro-interactions with his ammo and like off-hand system, but it’s a cool idea to have five weapons.

“League of Legends is probably the only MOBA that has something that crazy. But a champ with two buttons is never going to be hard. It’s just like Vayne.”

According to the latest champion blog post, Riot Games spent a year designing Aphelios, who’s also been dubbed the “big brain, sad moon boi.” Despite his relatively big kit, players will only really use his Q and his ultimate. W will be used to change weapons from his main-hand to his off-hand.