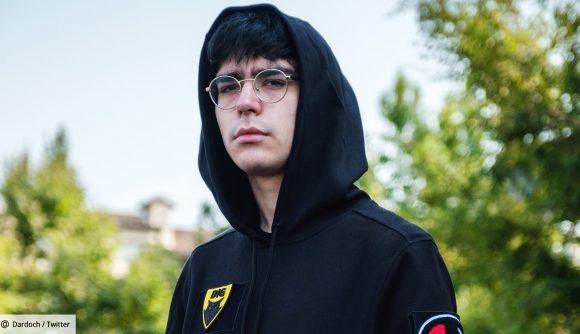 There are few figures in the competitive League of Legends scene more controversial than American jungler Joshua ‘Dardoch’ Hartnett. The 23-year-old is one of the brightest prospects to emerge from the region in the last few years, but his career has repeatedly stalled as his attitude outside has led him to being kicked from multiple teams.

He was recently released by Team Dignitas as the organisation’s director of esports, James Baker, explained that the jungler’s actions following a surprise loss to Golden Guardians “were not in line” with what the team considered acceptable. “Everyone gets frustrated,” he says. “But the things we saw were just not something we could work with moving forward.”

Yet, less than a week later Dardoch already appears to be making his next move as he has signed with ICM Stellar Esports, a European sports management agency based in London. While nothing has been confirmed, there is speculation that he could be set to look for a place in one of the European Regional Leagues.

Dardoch has made appearances for multiple LCS organisations. He began his LCS career with Team Liquid, where his behaviour was the main talking point in the infamous Breaking Point documentary, while he also had stints on Immortals, Echo Fox, OpTic Gaming, and Team SoloMid.

After multiple chances in North America, Dardoch could decide to try something new. ICM Stellar already has multiple clients who compete in the ERLs, including former Fnatic Rising toplaner Jordan ‘Shikari’ Pointon and Movistar Riders ADC Alexander ‘Venzer’ Kostadinov, so he would have no problem finding a place as an import.

Now for a HUGE announcement, We've signed @Dardoch!
With an undoubtable abundance of talent and leadership qualities Dardoch's next steps will for sure be his biggest yet. We look forward to supporting him through the next steps of his career. pic.twitter.com/r1vCQtrqJH

There are 13 ERLs in total as the strongest teams from each qualify to compete in the European Masters. The latest instalment of the tournament attracted around 377,000 viewers, according to Esports Charts, following the triumph of the extremely popular Karmine Corp team from France.

That is significantly higher than the 262,000 peak audience recorded by the League of Legends Championship Series (LCS) Summer Season, according to the same website.

No North American player has ever competed in the League of Legends European Championship (LEC), though a couple have experienced short stints in the ERLs such as Cuong ‘Flaresz’ Ta who spent time on Barrage in the United Kingdom.

Former Excel Esports LEC coach Josh Furneaux is now an agent for ICM Stellar and says Dardoch has “shown clear drive and determination to prove his worth.” However, he had no updates on the American’s future.