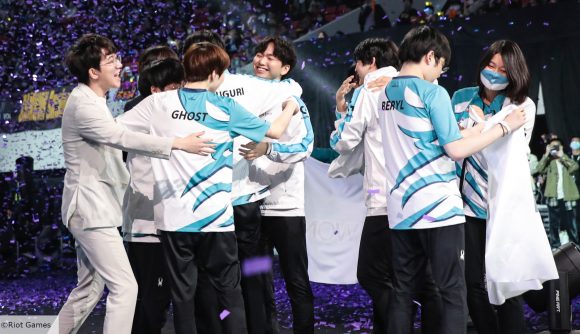 24-year-old Khan, who has previously represented fellow LCK giants T1, joins from another team with a Worlds title to its name, FunPlus Phoenix. DAMWON has also brought in another toplaner in Kim ‘Chasy’ Dong-hyeon, who was part of the Awesome Spear team that won the Korean Challengers league this year.

DAMWON picking up Khan and Chasy all but confirms that Jang ‘Nuguri’ Ha-gwon, dubbed one of the team’s top players during its Worlds 2020 run, will be moving on. According to Korean media, LCK teams have poured in with offers for Nuguri – some for “unprecedented amounts,” per the article’s translation to English. However, Nuguri has reportedly turned them down for a move to China. With FunPlus Phoenix seeing Khan depart for DAMWON, it is one of the prime LPL candidates to sign Nuguri to its top lane.

Nuguri was renowned for his dominant top lane displays in Shanghai, especially with his rather unorthodox main Kennen. He is the only member of the 2020 Worlds winning roster that will be on a new team next season.

DAMWON heads into 2021 with a new man at the helm after bringing in legendary LoL coach Kim ‘kkOma’ Jeong-gyun, who guided T1 (then SKT) to multiple Worlds titles in the mid 2010s.