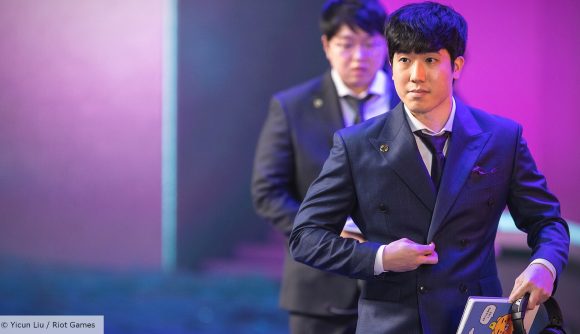 DRX’s League of Legends head coach Kim ‘cvMax’ Dae-ho has been handed a five-month suspension from competitions by South Korea’s Esports Fairness Commission as punishment for his behaviour while at the helm of Griffin.

Prior to last year’s Worlds, cvMax departed Griffin after allegations circled that he had behaved in an aggressive manner to the players on the roster. In November 2019, Riot dished out its own punishment to cvMax – an indefinite suspension from coaching in Riot’s esports competitions – but this was quickly overturned following public outcry. The case was then referred to a third party investigator.

Now, well over a year since the initial allegations were levelled, cvMax has been served a suspension that will see his status as a Korean Esports Association member stripped from him until May 2021, according to Inven Global. This means he cannot perform any coaching duties with current team DRX, which he steered to a Worlds quarter-final this year.

Inven Global also reports that the ruling found cvMax to have acted aggressively to Griffin toplaner Choi ‘Sword’ Seong-won. He allegedly struck the player’s chair and shook him by the shoulder.

However, cvMax’s attorney has told the publication that he “doesn’t understand” why the ruling has been made with the trial still ongoing.

“Such harsh penalties should be decided after listening in to the people involved and through logical processes,” he says. “It’s as if they’ve already decided the penalty and just went through token procedures to announce it in a few days.”

The timing of the ban has also been criticised by DRX. While the team says it is in “no doubt” that the eSports Fairness Commission’s investigation was conducted fairly, cvMax’s ban, which comes into effect from tomorrow, comes a day before the squad registration deadline for the KeSPA Cup 2020, which begins on December 21.

It is also ten days before the registration deadline for the 2021 LCK Spring Split.

DRX is now requesting that the Esports Fairness Commission looks into a “change in disciplinary action”, such as through postponing cvMax’s suspension or reducing the duration, to minimise the damage on its season.