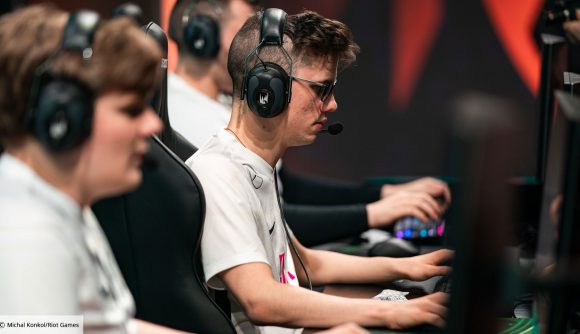 SK Gaming has announced that Juš ‘Crownshot’ Marušič will be parting ways with the organisation. In a video published on November 16, SK pays tribute to its now ex-botlaner in a farewell montage. Crownshot’s split from SK follows reports from Esporin and esports journalist Jacob Wolf that the team is looking to bring in fresh faces for the 2021 LEC season.

Crownshot entered the LEC at the start of 2019 alongside fellow former MAD Lions compatriots Tim ‘Nemesis’ Lipovšek and Oskar ‘Selfmade’ Boderek, joining a newly-franchised SK that had not been in the LEC (then EU LCS) since 2015. Crownshot helped his new team make the playoffs in Spring 2019, and once again in Summer 2020, although both occasions ended in first round exits.

Crownshot originally posted on September 19 that SK was allowing him to explore opportunities in both the LEC and LCS, with the latter seemingly a more-likely destination considering how stacked the LEC is for bot lane talent. Having also become a Twitch community favourite, we could very well see Crownshot transitioning into full-time streaming should he find himself without a team for the upcoming Split.

Alongside Crownshot, rookier midlaner Dirk ‘ZaZee’ Mallner and veteran jungler Kim ‘Trick’ Gang-yun may also be on the way out if the reports come to fruition. Trick spent a year with SK, while ZaZee’s departure after only a single Split, in which he narrowly missed-out on being awarded ‘rookie of the Split’, may raise a few eyebrows.

The reports themselves reveal the potential replacements SK has lined up. If accurate, then we could see Misfits Premier bot laner Jean ‘Jezu’ Massol, 1907 Fenerbahçe midlaner Ersin ‘Blue’ Gören, and LDLC OL jungler Kristian ‘TynX’ Østergaard join the team.This would undoubtedly represent a huge investment into rookie talent from SK, perhaps taking a leaf out of MAD Lions’ book following its wildly-successful season with a roster stacked with LEC debutants.