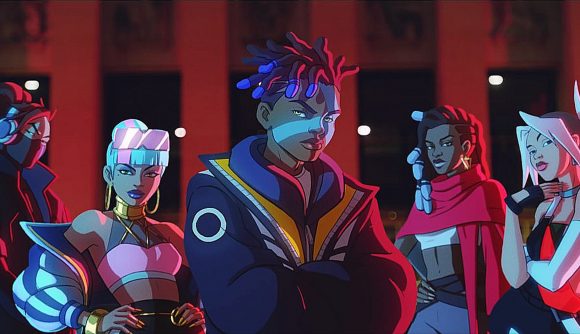 A musician has created an incredible heavy metal cover of ‘Giants’, the hip hop track by League of Legends band True Damage.

The cover by Tre Watson also features a short cameo from caster Clayton ‘CaptainFlowers’ Raines, who takes on Qiyana’s (Becky G’s) verse in the song. The rap/ metal mashup has also been picked up by Riot’s creative director Christian Linke on Reddit. In the comments of the post featuring Watson’s (u/koibitosenpai’s) cover, Linke (u/RiotPraeco) says: “Damn. This is really good. Sigh… guess it’s time for Pentakill 3.” So far, Watson’s cover has been viewed over 34,000 times and has received over 6,000 upvotes on Reddit.

Giants is the first track to come from the new League band True Damage, which consists of Senna (Keke Palmer), Qiyana (Becky G), Ekko (DCKWRTH and Thutmose), and Akali (Soyeon), and has already been subject to a number of covers and mashups, including this one with previous League band K/DA.

CaptainFlowers and I did a Metal Cover of Giants! The Rap God of the LCS Debuts in a Metal Song! from r/leagueoflegends

As was alluded to by Linke, the heavy metal cover gives fans a nice throwback to the days of Pentakill, who blessed fans with metal bangers such as ‘Lightbringer’ and ‘Mortal Reminder.’

Where does this latest genre experiment rank amongst the many examples we’ve seen over the years? With the positive reception it’s received so far, we’re going to guess ‘highly.’ Bravo, Tre.