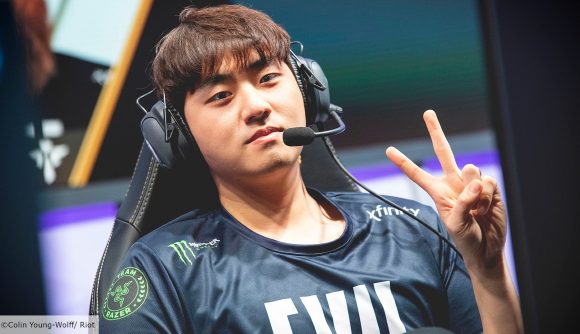 Bang, who lifted the Summoner’s Cup twice during SK Telecom’s iconic period of international dominance in the mid-2010s, left the organisation in 2018 to join 100 Thieves in the LCS. After just one season, he moved on to Evil Geniuses. Both stints, particularly the former with 100 Thieves, were disappointing. Now though, Bang is back in Korea after two years away for the first franchised LCK season, joining Afreeca Freecs as its starting botlaner.

The team also announced the signing of support Son ‘Lehends’ Si-woo from Hanwha Life Esports, which has gone big in the offseason to create a competitive roster including former DRX duo Kim ‘Deft’ Hyuk-kyu and Jeong ‘Chovy’ Ji-hoon. Afreeca Freecs finished a respectable fourth in the LCK Summer Split regular season this year, but failed to make Worlds after being knocked out of the regional qualifier for the third LCK spot by T1.

Following the announcement of Bang’s return to South Korea, another member of the SKT old guard was revealed to be coming back to the LCK.

While he never won a Worlds with the organisation, MSI 2017 winner Han ‘Peanut’ Wang-ho has penned a two-year deal with Team Dynamics as its new jungler.

With former top players returning to their home region, lots of roster movements and rebuilds, and the new stability of franchising, the 2021 LCK season will look considerably different to the season just gone.