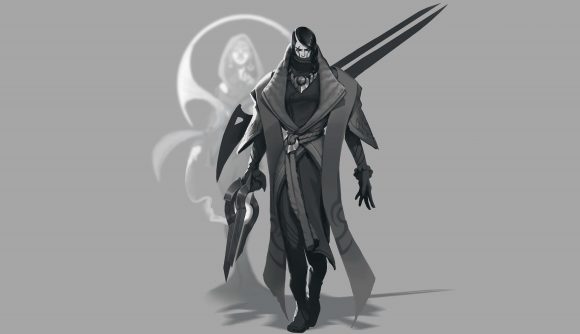 The new League of Legends champion, dubbed the big brain, sad moon boi, was a year in the making, according to Riot Games’ creative team. Aphelios, The Weapon of the Faithful, is a Lunari religious assassin with an arsenal of magical moon relic weapons, but to be successful with him, you’ll have to learn how to use his complicated abilities in succession rather than rely on your twitch reflexes.

Aphelios has five weapons, which can be utilised through the Q, W, and R keys. But you can’t choose what weapon he’ll equip. Instead the weapons will be eqipped in a cyclical fashion, rotating to the next one after its ammo has depleted. Once unequipped, the weapons will recharge in the background.

Because of Aphelios’ complicated loadout, players planning to main him will need to grasp when to launch an attack and what combinations to use – the so called “galaxy brain” if you’d like.

“One of the benefits of not being able to choose which weapon you have is that we could make the combination of his weapons super OP in different situations,” game designer Stash Chelluck, says in the blog post explaining the origin of the champion.

“Because of the ammo, you force players into a scenario where they need to recognise their strengths at that exact moment. You can give them this combination of weapons that’s really strong for dueling so they think, ‘Oh damn. I have to fight RIGHT NOW.’”

But because Aphelios’s abilities are so different to any other found on the Summoner’s Rift, the League of Legends team had to create a custom HUD for the champion. The reason for this is because he has no passive, no real W, and no E. This allows players to focus on what weapons Aphelios has equipped and what plays you can make from that.

If you want to give the Lunari assassin a go soon, he’ll be hitting the servers on December 10. Just expect to put some real hours in to work out how to utilise his weapons effectively and make those big brain plays that we’re all expecting.