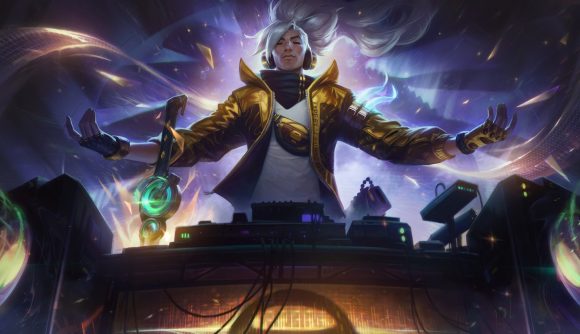 Riot Games has unveiled its in-game collaboration with AAPE By *A Bathing Ape; a Prestige Edition skin for True Damage Yasuo, which fans caught a first glimpse of on the PBE server. The collaboration also includes a real life apparel collection which will be available at select retailers shortly.

Full details of the limited run apparel line will be revealed on September 18, but what we know for now is that it is a unisex limited apparel collection, and features an outerwear jacket, t-shirt, pullover hoodie, cargo pants, a pair of sneakers, and a hat. The line will be sold through AAPE.jp, as well as select stores in various cities around the world.

As for the in-game skin, it was originally developed with modern-day streetwear and lifestyle design implications in mind. Riot Games say adapting the design to feature AAPE By *A Bathing Ape “felt authentic and resonant.” It will be available September 25 for 100 in-game Prestige Points.

The majority of the retailers are in Asia, though they can be found on both the East and West coast of the USA as well. A full list of cities stocking the line can be found below:

If you’re not anywhere near those though, your luck hasn’t run out just yet. An exclusive t-shirt of True Damage Yasuo Prestige Edition will be available globally on both the Riot Games’ merch website and as a part of the full collection once the line launches.