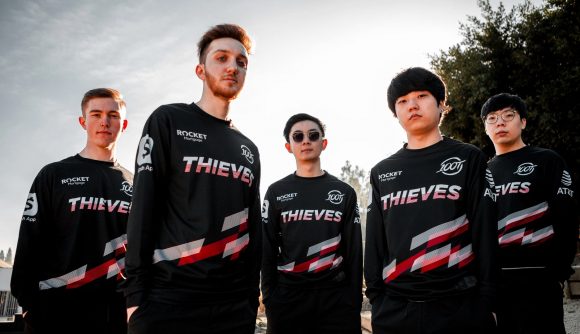 Following a mixed run of form in recent weeks, 100 Thieves’ League of Legends team has decided to bench Tanner ‘Damonte’ Damonte in favour of Tommy ‘Ryoma’ Le. As first spotted by Travis Gafford, Damonte is unavailable for media interviews during this weekend’s LCS games, with Ryoma taking his place. The team later confirmed the switch via its official Twitter account.

The change appears to reflect a shift in the mid lane meta. Whereas Damonte typically excels on roaming mages such as Twisted Fate and Galio, Ryoma is perhaps better-suited for a control mage meta, where the likes of Azir and Syndra currently reign supreme.

The move has stirred confusion among parts of the community, with some considering the gap in ability between the two players too great to merit Ryoma’s inclusion going forward. Additionally, some have pointed out the risk that introducing a new player into the squad may negatively affect team synergy.

However, Ryoma has previous LCS experience, and is currently enjoying a strong spell in the Academy league. As such, the addition of a player in-form – with a champion pool befitting the current meta – may be what 100 Thieves needs.

For this weekend's games, @Ryoma100T will be starting as our LCS midlaner. We’ll continue to evaluate our roster as the season progresses. #LCS

This revised 100 Thieves roster is set to face Evil Geniuses, Team SoloMid, and Golden Guardians in the LCS this week.