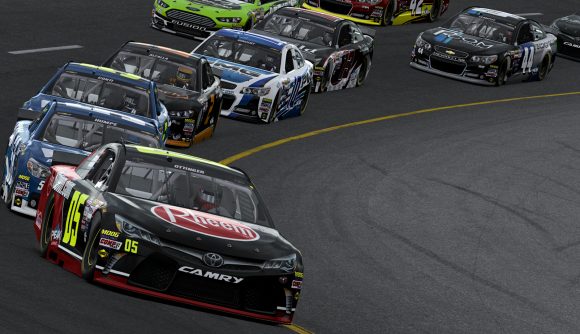 A NASCAR driver has been suspended without pay after he used a racial slur during an iRacing event, which was broadcast on the official eNASCAR website. Kyle Larson has since apologised for using the word, and will be required to carry out sensitivity training in order to return to the grid.

Larson used the racial slur after having trouble communicating with his spotter. But his voice was broadcast to everyone and picked up on the official Monza Madness stream, as well as several other racers’ streams. His team, Chip Gannasi Racing, have since denounced Larson’s behaviour as “offensive and unacceptable.”

“I made a mistake and said the word that should never, ever be said,” Larson tells ESPN in a video. “There is no excuse for that. I wasn’t raised that way. It’s just an awful thing to say. I feel very sorry for my family, my friends, my partners, the NASCAR community and especially the African American community.

“I understand the damage is probably unrepairable and I own up to that. But I just want to let you all know how sorry I am and I hope everybody is staying safe during these crazy times.”

Well, @KyleLarsonRacin apparently dropping an n-bomb could be the biggest story in sports this weekend. pic.twitter.com/5gmkbcK6yM

Since the 27-year-old’s behaviour clearly violate NASCAR’s code of conduct, the driver will need to complete a sensitivity course, similar to the one FaZe Dubs recently finished, before the organisation even considers lifting his suspension.