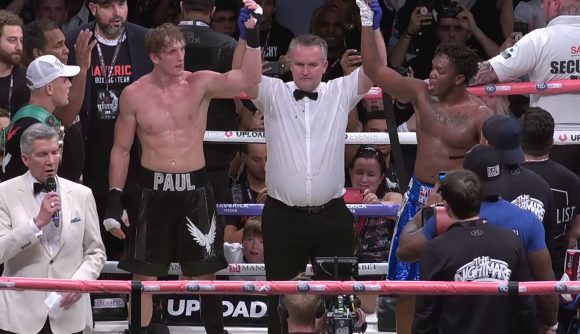 Whether you like the YouTube stars or not, Logan Paul and KSI will be hopping back into the ring for another boxing match this weekend, and this time there’ll be no protective gear.

The feuding pair, who have a combined following of over 40 million, first traded their blows in Manchester last year, and despite a good fight, judges ruled it as a convincing draw. Now officially professional boxers, the pair will strap on 10oz gloves and take to the ring in front of a nearly sold out crowd in America.

And although KSI has more YouTube subscribers and video views than Paul according to JD Sports, Paul has the most watched video and more social media followers. If their social media stats are anything to go by, the much-anticipated fight, which will be six rounds long if it goes the distance, could be another draw.

According to stats from last year’s fight though, Paul landed 18 more punches than his opponent, and now that the headgear is off, we might see one star hit the canvas this year.

However, it’s KSI himself who’s made the boldest prediction of all, stating that he’s going to knock the controversial American YouTuber out in round five.

“I’m excited, I’m very excited,” KSI told Good Morning Britain in September. “I can’t wait to get in there an knock him out properly.

“I’m going to break him down, show him I’m the better boxer and that I have a bigger heart  – and I’m going to knock him out in round five.”

KSI takes on Logan Paul at the Staples Centre in Los Angeles on Saturday, November 9.