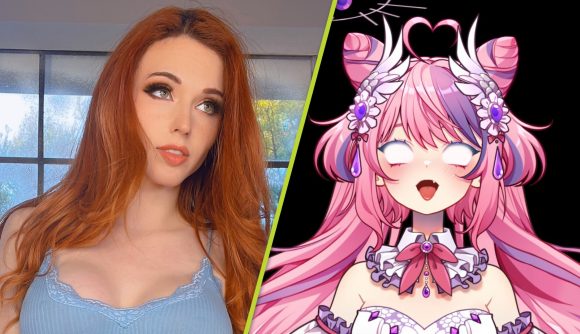 ‘Ironmouse’ and Kaitlyn ‘Amouranth’ Siragusa have been prominent in streaming news since the new year started, with the former achieving huge subscriber counts on Twitch and the latter announcing her OnlyFans retirement as she winds down her career in the streaming spotlight.

According to a new report from Stream Hatchet, VTuber sensation Ironmouse has officially become the most-watched female streamer on any platform in Q1 2022. She’s accrued 10.7 million hours of watch time in the past three months alone, and during a March streaming marathon, she became the “third overall Twitch streamer of all time” when it comes to subscriber count. Her ridiculous sub count topped out at 171,000, placing her behind only Tyler ‘Ninja’ Blevins and record holder Ludwig ‘Ludwig’ Ahgren.

Ironmouse is also the top VTuber regardless of gender or platform, with Aleksadr ‘Kuzuha Channel’ Lagusa on YouTube coming in at second place 3.5 million hours of watch time behind that of Ironmouse. These are huge feats considering that this is across all streaming platforms and not just Twitch.

Amouranth comes in as the second most-watched female Twitch streamer in the period, with 8 million hours of watch time, which is still a significant 2 million hours behind Ironmouse. Amouranth is known for wacky ASMR streams, while Ironmouse specialises in anime avatar gaming goofs.

It’s interesting to note that even though she is still a very prominent Twitch streamer, Amouranth is diversifying her portfolio, making it no secret that she’s winding down her on-screen persona for more behind-the-scenes work.

Grand Theft Auto 5 is the most-watched game across all streaming platforms according to the report, with a whopping 534 million hours watched; not bad for an almost decade-old game. League of Legends is second at 517 million hours, and Valorant third at 322 million hours.