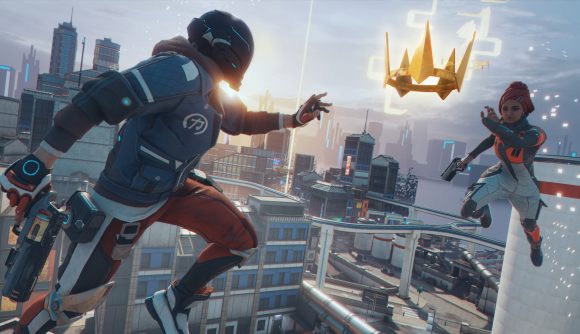 We’ve all heard the name by now. Hyper Scape, also known by its codename Prisma Dimensions, is Ubisoft’s new free-to-play battle royale designed to bring a fresh new take on the genre. While the game looks and feels a little similar to Apex Legends and The Culling, it’s got a trump card over its competitors – it’s built with streaming in mind.

Ubisoft Montreal had toyed with the concept of games as a spectacle for a while, but it wasn’t until Hyper Scape’s development that the team was able to fully explore that idea. Now, instead of passively watching up to 100 players do battle in a virtual version of Paris in 2054, viewers on Twitch actually have the power to vote for game-changing events, like giving all players infinite ammo or forcing the arena to have low gravity, through an extension. While some may (and rightfully so) argue that this will mess with the competitive integrity of games, it should make connecting with audiences on Twitch even easier for streamers.

That’s not the only thing either. Viewers will be able to level up their own battle pass by watching Hyper Scape streams in the future, and if a streamer wants to play with viewers and subscribers, they can do so with a click of a button on the extension. The days of streamers being spammed by friend requests by keen viewers is over.

“When we started with the games as a spectacle concept in mind, we wanted to formulate and turn that into something strong” Graeme Jennings, senior producer, tells our sister site PCGamesN in an interview being published tomorrow. “So we built some prototypes a few years ago and we started to engage with Twitch on this. We did various workshops with streamers and viewers to see what was interesting for them so we had both sides, and then we put together a feature set and built that hand-in-hand with them.”

While the extension has benefits to all, it will give small streamers a boost when it comes to interacting with their core audience – something Ubisoft is keen to explore further.

“I think it’s positive for the community overall,” Jennings adds. “It will help small streamers bring things together. The Twitch extension is something we’re going to develop as we go seasonal, and we will be adding more and more features to this extension, so you can expect new things all the time, some of which will be targeted at smaller streamers.”

If you’re wondering how Hyper Scape is different from other battle royale games out there, then you’re not alone. But Ubisoft has a few tricks up its sleeve for Hyper Scape gameplay. Instead of being stuck with the same old weapons in its solo or squads Crown Rush mode, players will be able to pick up hacks – objects that grant offence, defence, or movement abilities.

Players can carry two weapons and two hacks, but they can be swapped out at any given time. Duplicates of hacks and weapons can also be fused with a player’s loadout to grant magazine size, damage stats, or cool down timer upgrades.

You also still have a purpose if you die early in Hyper Scape. Dead players will be respawned as an Echo – a sort of ghost if you like – who can scout ahead for teammates and ping nearby enemies. Dead players can also be brought back by their team via a portal dropped by dead enemies.

There’s also a new way to win in Hyper Scape. During the Showdown phase, a crown will be dropped in the end arena, and players can either work to eliminate remaining enemies or pick up – and hold – the crown for 40 seconds.

So if Hyper Scape sounds up your street and you’re ready to play to the crowd, then you’re in luck. PC players get access to the technical test phase today, and the game will be available on Xbox One, and PlayStation 4 at some point in the future.