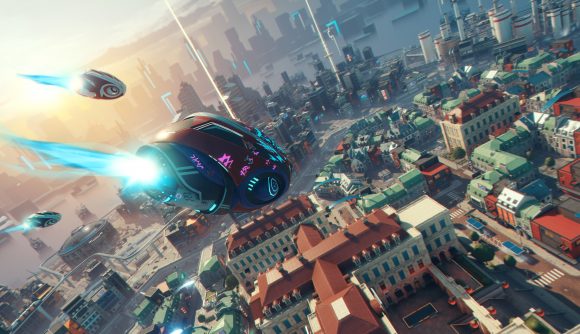 It’s always exciting when a new shooter comes out in the Twitch community. Chasing the example Riot Games’ Valorant set, Ubisoft has released the technical test for its new battle royale Hyper Scape. Streamers on Twitch flocked to the game to give it a go, and viewers tuned in to get a chance to get access to the game themselves (via PCGamesN).

In less than 24 hours of the game being open to streamers to play on the site, Esports Charts shows that over 4 million hours of the game has been watched so far. At its peak, Hyper Scape had 466,673 viewing streams – a peak only beaten by the Just Chatting category at 489,227. The next highest peak was League of Legends with 336k – so obviously audiences are keeping an eye on Ubisoft’s new title.

Although viewers were tuning in to see their favourite FPS players master a new game, there was also the promise of drops – linking your Ubisoft account to Twitch meant that you had the opportunity to get access to the technical test yourself. You might even get the opportunity to land in a lobby with some of a star streamer.

The technique to get this much engagement with Twitch viewers isn’t a first. Not too long ago Riot Games launched Valorant with a closed beta which you could only get access to through being a lucky viewer. It encouraged engagement and by the end of the beta, an average of three million gamers played Valorant each day – numbers we’re sure Ubisoft would love.

If you want to get your hands on Hyper Scape then you just need to link your Ubisoft account and watch any of the ‘drops enabled’ streams over on Twitch to get your chance.