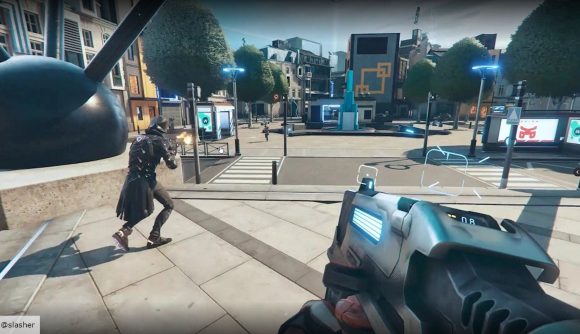 If recent leaks are to be believed, Ubisoft is very close to revealing a new free-to-play battle royale game. Rod ‘Slasher’ Breslau says Hyper Scape, which is a “AAA multiplayer fast-paced FPS” is due to be teased by the Montreal-based developer behind Rainbow Six Siege later today.

The esports consultant, who also says he knows why Guy ‘Dr DisRespect’ Beahm has been permanently banned from Twitch, tweeted out details about the game that he’s apparently received from his sources. “Hyper Scape is a free-to-play BR FPS set in a futuristic virtual world for both PC and consoles with the console launch coming later this year including crossplay,” he says.

The game, which apparently goes into closed beta next week, is purportedly “built with streamers in mind.” Slasher says the the game has a “full partnership” with Twitch that will allow chat to directly impact live games with “game-changing events.”

Ubisoft has apparently also worked with a number of pro players, content creators, and streamers on promoting the game, so if the leak’s to be believed, we should start to see some gameplay footage soon.

If true, this will also be Ubisoft’s first foray into the battle royale market. With other free-to-play titles like Call of Duty: Warzone, Fortnite, and Apex Legends to contend with, it’s got a lot of competition to content with.