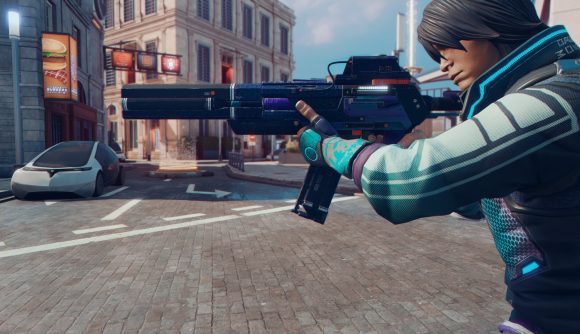 Hyper Scape looks and feels like a standard battle royale, but because it was built with viewers in mind, it holds a key difference over its competitors – it’s interactive. The game has a Twitch plugin, known as the Crowncast extension, which allows spectators to directly influence games through Hyper Scape events, level up their battle pass just by watching creators, and allow streamers to invite loyal fans to their party with a click of a button.

The extension played a big part in helping Ubisoft market the game when it was first announced last month through the use of Twitch drops. Of course, viewers were still using the extension to interact with their favourite streamers and vote for game-changing events, but that wasn’t – and still isn’t – the be all and end all with Crowncast. Ubisoft is going all in with this technology because it seems people love it.

“The extension is widely perceived as one of the key differentiators for Hyper Scape,” Marie-Josée Ouellet, Hyper Scape’s associate producer, tells The Loadout. “From some internal surveys we conducted, more than 90% of users would recommend the Crowncast extension to their friends which is huge and shows the appeal.”

So far, by working with Hyper Scape Founders, small to medium size streamers who live and breathe the game, Ubisoft has developed Kudos, a new feature for Season 1 that allows viewers to support their streamers during Hyper Scape streams. Kudos can be purchased with Twitch Bits, and when used, streamers get a cut of the revenue. But there’s more to come.

While Ouellet and Ubisoft clearly have one eye on the future of Crowncast and the game’s success on platform’s like Twitch, they’re also focused on making its inaugral season enjoyable for all. Along with the casual-competitive element the streets of Neo Arcadia seem to ooze, Ubisoft has been busy prepping the game’s lore.

New events and memory shards, which offer a window into the story behind the game, can now be picked up in Hyper Scape, but like other online service games, some of these fragments and events will have an impact on the world players experience.

“Season 1 is the beginning of our overarching story and lore,” Ouellet explains. “Season after season, there will be new events happening in the Hyper Scape game and universe, which will progressively unfold the dark mystery hidden in the virtual world. Some of those events will have direct impact on the game’s map and experience while the Memory Shards scattered around Neo Arcadia will reveal some of our characters’ background and motivations.”

It’s a formula that’s worked for Apex Legends, but unlike Respawn’s game, Ubisoft isn’t prepared to jump straight into competitive just yet. According to the associate producer, a competitive mode isn’t on the cards since the team are still monitoring player data and balancing Hyper Scape weapons and Hyper Scape hacks.

Although events such as the Creators Cup and Twitch Rivals are being planned, Ubisoft’s position remains the same: It’s going to stop and listen to its players, before adding a half-baked mode that’ll split the playerbase.