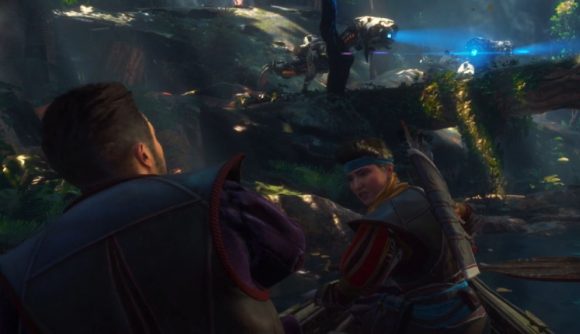 It has only been a few months since Horizon Forbidden West launched, but already fans are hungry for more. During the June 2 State of Play showcase from PlayStation, we got another, longer taste of Guerrilla’s sci-fi world with some Horizon Call of the Mountain PSVR 2 gameplay, and it looks pretty breathtaking.

In this extended look at gameplay, we see large-scale traversal which hints at a lot of exploration, plus a look at some combat mechanics too. We see the protagonist taking on machines with a bow, which is bound to feel pretty satisfying in VR. There’s also plenty of dodging and evading attacks from all forms of machines.

The trailer also hints at the overarching narrative of Call of the Mountain. In your quest, you’ll be trying to find out why the machines are attacking. That’s pretty vague at the moment, but the glorious visuals and the promise of actual traversal and combat will certainly be a strong enough prospect for those looking forward to this game.

Summer Game Fest 2022 is now in full swing with a number of key events planned over the next few weeks. And, this might not be the last PlayStation Studios game we see as speculation suggests we could see the God of War Ragnarok release date at Geoff Keighely’s event on June 9.