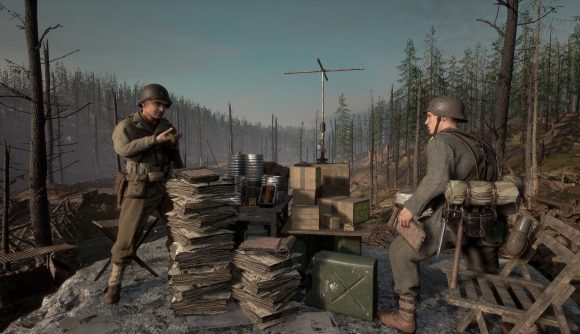 Team17 has been the publishing partner of Black Matter’s Hell Let Loose for several years now, but today the company has announced it is acquiring the IP for £31 million. A contingent consideration of up to £15 million will also be on offer, subject to performance.

“We are delighted to be announcing the acquisition of the Hell Let Loose IP,” Michael Pattinson, the CEO of Team17 Games Label, says in a press release. “Hell Let Loose has quickly become a highly credible and innovative multiplayer tactical first-person shooter supported by a very passionate and highly engaged community with over six million players.”

Through this acquisition, which Team17 notes is the “next step” in expanding its ownership of high-quality IP, the publisher hopes to “improve and expand” the existing offerings so the game can become the “definitive large-scale team-based military simulation.”

The news of the acquisition follows a hugely successful year for Black Matter, in which the team launched the game out of early access on PC, released PlayStation 5 and Xbox Series X|S versions of the game, and saw player numbers soar thanks to the game’s inclusion in November’s PS Plus offerings.

It’s quite a journey for a game that started out as a Kickstarter backed by fans and it’s a journey Black Matter’s Max Rea has spoken at lengths about – including in our inside 2021 interview late last year.

But now the team’s journey has taken a new turn and the CEO is excited to see what’s next.

“It’s a really exciting time,” Rea tells The Loadout. “The acquisition for us is really the process of locking-in the (already great) working relationship with Team17. It’s also such an affirming milestone for the whole team – the entire gang is really thrilled with it.

“Practically, [there won’t be many] changes – we’ll be working on Hell Let Loose for years to come, but with increased development power from Team17 as we build out the team developing the game. Obviously people will have their own reactions, but we hope that this should give the community confidence that it now has the formal ownership and support of one of the biggest video games businesses – and one that already knows the title inside out and upside down!”

While the news of the acquisition will certainly steal the headlines for the the next few days, Black Matter’s focus remains on improving Hell Let Loose and developing the Commonwealth forces.