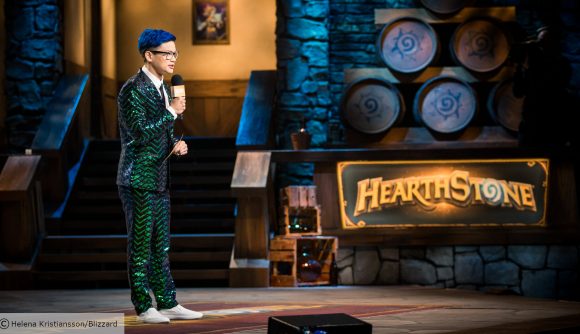 The 2020 Hearthstone World Championship recently concluded with a well-deserved victory for Japan’s Kenta ‘glory’ Sato. However, the drastic decline in the event’s viewing figures noted during the event when compared to previous years has prompted discussion within parts of the Hearthstone community.

2020’s event recorded a peak viewership of nearly 90,000, with 23,000 average viewers. This may not seem particularly low at first but, to put the drop into perspective, 2019’s Hearthstone Global Finals – the final world championship to air on Twitch – had recorded a peak of over 275,000 viewers, with 110,000 viewers on average, according to Esports Charts.

Responding to a Reddit thread lamenting this year’s paltry numbers via Twitter, Hearthstone esports host Dan ‘Frodan’ Chou calls the current situation “sad”. Frodan also stresses that he doesn’t blame the esports team or even host platform YouTube itself for the decline. “Everyone worked incredibly hard this year despite the obstacles,” he states.

In response to Frodan’s tweet, scene veteran Brian ‘Kibler’ Kibler partly attributes the declining popularity of constructed Hearthstone to the YouTube move, noting that people are now “less aware of events happening and the decks involved.” According to Kibler this is compounded by the rising salience of the game’s Battlegrounds mode (a late 2019 addition), with the personality noting that “most Twitch events are Battlegrounds as a result of the move, which makes that feel like a more supported format weirdly.”

I think the esports move to YouTube has also hurt interest in constructed in general, since people are less aware of events happening and the decks involved. Most twitch events are battlegrounds as a result of the move which makes that feel like a more supported format weirdly.

Activision Blizzard had signed an esports viewing rights agreement with YouTube back at the beginning of the year, netting the company a reported return of $160 million. The deal itself saw both professional Hearthstone and the Overwatch League up sticks from Twitch to join the video-sharing giant, with the latter also reportedly experiencing a decline in viewing numbers.

However, on the other side of the Activision Blizzard coin, Call of Duty esports has only flourished since the deal was struck, with the 2020 Call of Duty League Championship setting a new record peak of over 330,000 viewers for the competitive scene.

Although it seems that the YouTube deal hasn’t quite paid off in terms of viewership for Activision Blizzard just yet – though CoD is of course performing spectacularly well – the company seemingly remains intent on longer-term growth, having already doubled the number of Masters Tour events this year. Regardless, it appears that there is still much for this Activision Blizzard/YouTube partnership to do in order to capture a wider audience.