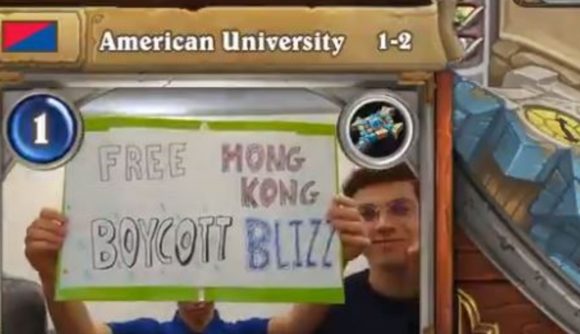 Blizzard is coming under increasing pressure from gamers around the world in response to banning Hearthstone player Ng ‘Blitzchung’ Wai Chung, after the player used a post-match interview to voice his political views about Hong Kong.

Blitzchung, who represented Hong Kong at the 2018 Global Games, will not be able to compete in competitive Hearthstone for 12 months and also had his prize money for the Grandmasters Season 2 event rescinded following the incident on October 6. The two casters, seen in the clip to be hiding under the desk during Blitzchung’s protest, have also been punished by Blizzard.

The decision to ban Blitzchung for voicing his political opinion has led to widespread support for the player from the gaming community, with the #BlizzardBoycott hashtag trending globally on Twitter. There was also a protest from the American University Hearthstone team, who were competing in the 2019 Hearthstone Collegiate tournament yesterday, October 8. The team held up a sign to their player cam at the end of a match reading “Free Hong Kong, boycott Blizz”, which saw the stream cameras quickly cut away.

The stream of the event also fell victim to chat spamming, with the message “Spam this pong to free Hong Kong” being repeatedly posted by viewers.

Welcome to every Blizzard esports Twitch chat for the next month

Esports consultant Rod ‘Slasher’ Breslau also informed people via a tweet that interviews with teams at the Collegiate event would no longer take place.

Not everyone at Blizzard agrees with what happened.

Both the “Think Globally” and “Every Voice Matters” values have been covered up by incensed employees this morning. pic.twitter.com/I7nAYUes6Q

There have also been protests from Blizzard employees. A photo, posted to Twitter by former employee Kevin Hovdestad, shows two of the company’s values – which are engraved onto a statue at Blizzard’s main headquarters – covered by sheets of paper. According to Hovdestad, the two values are ‘Think Globally’ and ‘Every Voice Matters’.

With exception to the initial statement declaring Blitzchung’s ban, there has been silence from Blizzard on the matter. The mounting pressure over the last 48 hours, however, may soon change that.