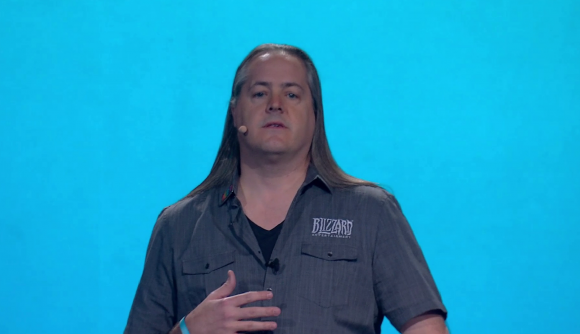 The president of Blizzard admits that more time should have been taken to consider banning Hearthstone player Chung ‘Blitzchung’ Ng Wai for shouting ‘Liberate Hong Kong’ in a post-match interview.

J. Allen Brack, who made a brief apology for the incident at Blizzcon, believes the decision exposed a level of “immaturity” in the company. Speaking to The Esports Observer about his year at the helm of Blizzard, Brack notes that no one expected the ban to throw Blizzard into an already escalating international and political incident.

“We have some immaturity as an organisation in terms of how to think about it and how to deal with it,” Brack tells The Esports Observer. “No one had any idea that this was going to blow up to be the international incident that it has become. It’s been a challenging month for sure.

“There’s some work for us to do, to align rules, and to think through all that and think about how we’re going to handle this going forward. But this is the first time for us, really. So it exposed some immaturity for sure.”

Regardless of the the reaction to the ban, Brack is now focusing on the future of Blizzard, and the release of several new games. With Overwatch 2, Diablo IV, World of Warcraft: Shadowlands, a new Hearthstone deck, and Hearthstone: Battlegrounds set for release, Blizzard is preparing for another busy year.

Asked what he’d go back and tell himself after taking the reigns from Mike Morhaime in November, 2018, Brack says: “Buckle up, it’s going to be a really hard year. But you’re going to come out the other side and what’s on the other side of this is beautiful.”