It was a cold dark night in 2017 when Kazuki Morishita met with his old friend Ryozo Tsujimoto in a bar in Tokyo. The pair had rarely worked together in their long careers in the games industry but it was here, surrounded by the bright lights of Japan’s busy capital, that it all changed. Over glasses of sake and bottles of Asahi, the pair created the groundwork for Teppen, a new online card game that they believe has the power to match the likes of Hearthstone and send shock waves through the competitive scene.

“Every time we meet up we don’t really talk about business,” Morishita tells me at the Tokyo International Forum. “But at some point, we started to think about what we wanted to do together. Because Capcom has all these characters I thought about making an all-star game, then I brought that idea to Tsujimoto-son.”

Morishita is the CEO of GungHo Online, a Japanese studio known for many smaller games including the hit Puzzles and Dragons. He’d only worked with Tsujimoto, the producer of the incredibly popular Monster Hunter series, a handful of times before on light cosmetic collaborations, but they both had dreams of making something bigger. “Capcom has lots of different worlds and concepts of gameplay,” Morishita, who started development on Teppen in 2017, says. “I was thinking about how we can put these different characters together, including ones from different types of games. The idea of a card battler came up.”

They decided on Teppen, as Tsujimoto puts it, because card games are an easy way to bring multiple franchises together for an “all-star game”. Teppen, which launched earlier this year in North American and Europe and then later in Japan, is a card battler that mixes characters from Capcom franchises like Resident Evil, Street Fighter, Devil May Cry, and Mega Man. The main difference between Teppen and other games like Hearthstone is that Teppen isn’t turn-based, it’s played in real-time.

“I kept thinking, why do card games have to be turn-based? What’s the reason?” Morishita says with a bit of exaggerated frustration. “But early on in the process, we wanted to make it a real-time game. I’m a big fan of action games, and Capcom has a lot of them. I wanted to take the strengths of action games and bring them to the card game genre.” 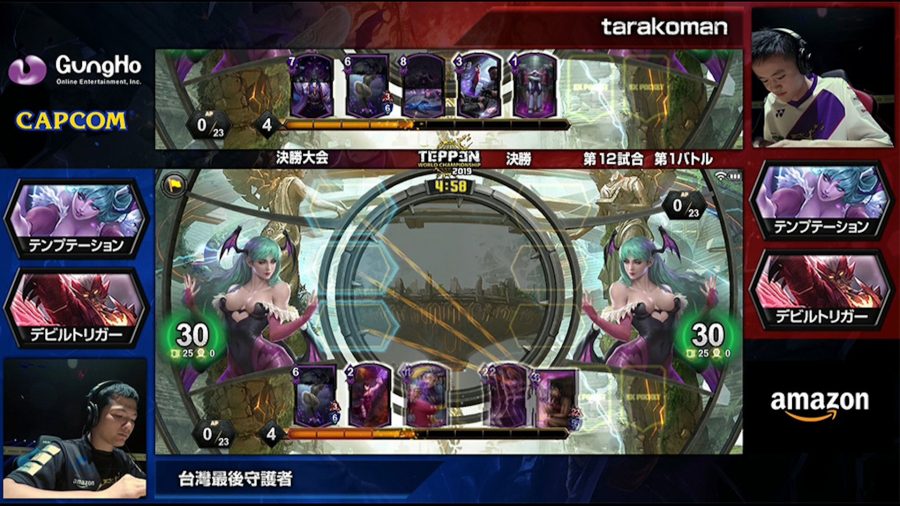 Morishita wanted to capture the action-oriented gameplay of Capcom franchises through the real-time system. Games like Devil May Cry and Monster Hunter have a huge emphasis on action and a gigantic set pieces. The team at GungHo, who is developing Teppen while Capcom publishes and offers some development support, felt that a turn-based system wouldn’t fit the franchises they were blending.

GungHo also wanted to create a fast-paced battler so that no single meta would emerge to dominate competitive play. In fact, the mere speed of the game makes multiple strategies viable. “It’s huge,” North American player Philip ’Ryuuzu’ Graham tells The Loadout. “I’ve been playing card games for 15 years and this one is different. You can lose a match by one second, that’s how some of the Japanese qualifiers played out.”

Ryuuzu talked to me about the metagame the night before the first Teppen World Championship, held high up in the corner of the Tokyo International Forum, two years after the idea for Teppen came up. Twelve players from four different regions converged in a WWE-styled stage complete with inappropriately dressed ring girls and smoke that seeped from the player entrance. They wanted the fans to feel like they were watching a fight, not a card-battler, and it worked.

“Most turn-based card battlers are linear, Teppen feels more dynamic,” Teppen community leader and streamer Tony ’Iowatheboat,’ who also grew up on card games, says. While there isn’t a single dominant meta, some characters still shine. “You’re going to see a lot of Ryu and Morrigan.”

Iowatheboat was right as Japanese competitor Fukazawa ‘Tarakoman’ Yutaro tried to close out the grand finals with Morrigan, but fell to Huai-Yong ’Last Guardian’ Wu’s Dante. It was an exciting finish, although the real-time element of Teppen didn’t make it much more engaging to watch when compared to any other card battler. Less than 6,000 peak viewers tuned in for the eight-hour stream, which compared to standard Hearthstone tournaments, is pretty low.

Related: All the biggest esports tournaments in one place

Outside of the world championship, GungHo and Capcom have hosted events at conventions like PAX West and they’re also planning a tournament at The Taipei Game Show in February, as well as another championship series in 2020. Street Fighter’s Akuma will also be added to the game near the end of the championship in December. Morishita and Tsujimoto are hoping a constant flow of new content and regular tournaments, both online and in-person, will support a growing player base for Teppen. 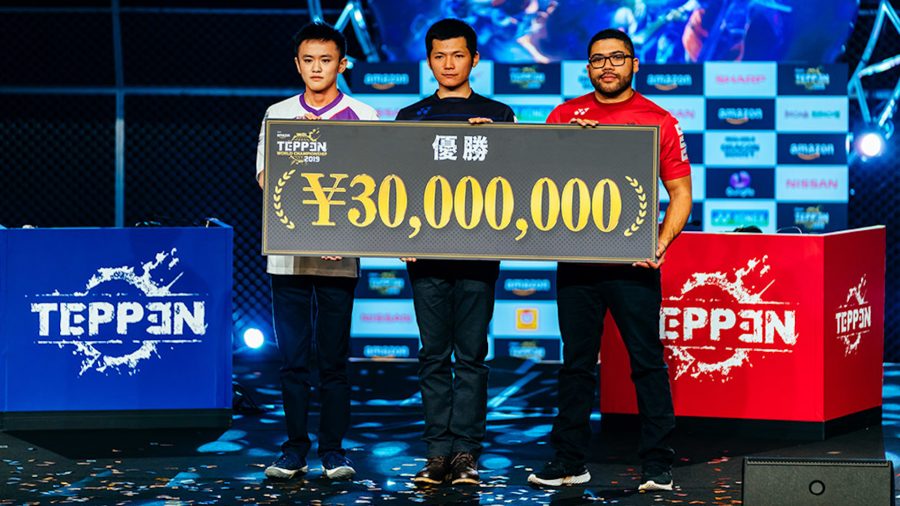 Since early December more than four million players have downloaded Teppen – positive statistics for a new mobile game but nowhere near the numbers some of the other giants that dominate the card-battling genre boast. Blizzard’s Hearthstone is the clear leader with over 100 million players, although the number of active players is almost certainly smaller. CD Projekt Red’s Gwent and Magic the Gathering Arena are also incredibly popular.

“We don’t want to be the biggest name in card games, we just want to be different,” Morishita says in response to a question about Hearthstone. “We want to bring in a new style to play within the genre. We’re trying to bring the strength of card games with the strength of action games in order to stand out. We think a lot of different types of players will be interested in Teppen.”

But just grabbing a small chunk of the market and growing steadily isn’t as straightforward as it may seem. Development on Bethesda’s Elder Scrolls: Legends card-battler has ceased, the console launch has been canned, and the game is all but dead. The future of the annual Masters Series tournament is unknown, although unlikely to continue. Valve’s Artifact was a disaster too with its player base dropping more than 95% within two months of its release. As these failures show, launching a unique card-battler and maintaining continuous growth takes more than recognisable franchises and unique gameplay. In this competitive space, you need something special.

GungHo and Capcom hope that the real-time element of Teppen sets it apart from other card games with major franchise tie-ins, drawing in players with gameplay they can’t get elsewhere. In short, they hope it’s special.

Aron is a freelance journalist based in Los Angeles. Find his other work in ESPN, The Verge, Gamasutra, and other sites. Help him will the Arizona Cardinals into being a good NFL team.