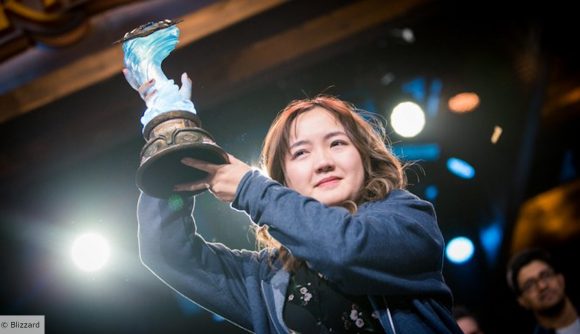 Her win is monumental for the Hearthstone and esports community, and she has become a beacon of light for female other female competitors in the scene.

“Two years ago, I remember I was competing in a huge tournament – I was waiting in the line for signups and there was this guy telling me, ‘You’re a girl, you should not be waiting in line here, it’s not for you,”  ESPN reports her as saying. “And now today, I am here, with all this support from the fans.

“I want to say to all the girls out there who have a dream for esports, for competition, for glory: If you want to do it, and you believe in yourself, you should just forget your gender and go for it.”

“This is the best way to strike back at those people who doubted me only because I am a girl. It proves that girls can be strong pro players, just as guys do.” – Xiaomeng “VKLiooon” Li pic.twitter.com/1PQczUHwim

Away from the esports stage, Blizzard announced that Hearthstone’s new deck, the Descent of Dragons is arriving soon, along with a new auto battler called Hearthstone: Battlegrounds.