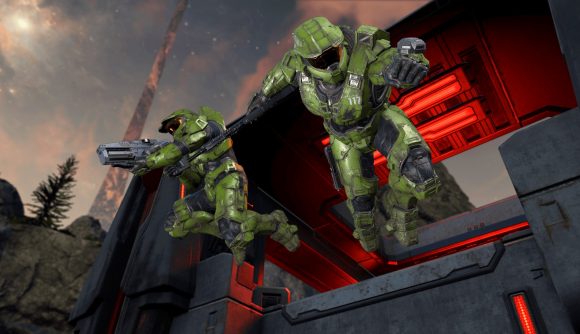 Industry veteran Jerry Hook, who most recently was the head of design for Halo Infinite, has been revealed as the head of a new first-party studio for publisher NetEase, and there are a few other former Infinite devs along for the ride.

Hook, who has had a lengthy career working for Microsoft on Xbox live and Halo, Bungie on Destiny, and then 343 on Halo Infinite, revealed in May that he would be leaving 343 for a new “saga”. It turns out that that will be Jar of Sparks, the brand new triple-A studio from NetEase that he will be the CEO and head of.

In a press release, NetEase says that Seattle-based Jar of Sparks wants to “build brand new franchises, with all new characters, stories, and worlds, to inspire the imaginations of players all over the world.” The studio will focus on “narrative-driven action games” and will have “full creative freedom”.

While the studio is only now going to start recruiting, Hook has attracted three other former devs from Halo Infinite to join him at Jar of Sparks.

Speaking to IGN, Hook says that while his new studio has the full backing of NetEase – even if the developers “slip” in their efforts to innovate with their first game – he is not aiming to create a big-budget blockbuster or live service behemoth.

“Everyone is always shooting for the 300 million mark or ten million mark, [and] I’m just like, okay, how about you build a team with the right budget that allows you to be successful with just a couple million or just a million? And you can be successful that way,” he says.

Jar of Sparks’ first game is likely many years away at this point, but fans of Hook’s past work will be more than interested to see what he and his other ex-Halo devs can produce.