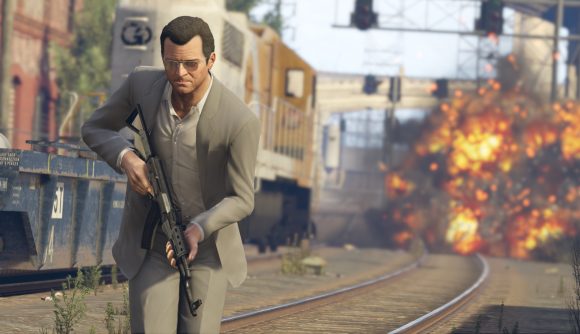 Scenes of the Hong Kong protests are being replicated in real time in Grand Theft Auto V’s Los Santos following the addition of riot gear, yellow hard hats, and more.

The cosmetics were added as part of the Diamond Casino Heist update, and the news of the new additions was spread through LIHKG, which is like the Hong Kong version of Reddit. It was then that the violent clashes representing the struggle against Chinese oppression started on the GTAV servers, according to the BBC (via PCGamesN).

The outfit is being dubbed ‘Glory to Hong Kong’ by its supporters and is being used by thousands of ‘Stand With Hong Kong’ crew members in game, who are throwing Molotovs at police cars, and damaging public areas such as subway stations. These instances pale in comparison to the current situation in Hong Kong though.

But of course, Rockstar’s game is not the first spill the current turmoil felt by Hong Kong supporters in the industry. The issue of Chinese and Hong Kong politics was thrust into the forefront of the games industry when Blizzard decided to ban a prominent Hearthstone player for using his post-match interview to lend his support to Hong Kong. The ban was subsequently reduced following public outcry but the impact of Blizzard’s decision is still felt today.

Blizzard president, J. Allen Brack, gave a brief apology at Blizzcon and has since said that the ban exposed “immaturity” within the company. Since then, protests in games have been relatively quiet – until now.

It’s also worth noting that GTAV has not been approved by mainland Chinese authorities, so it’ll be interesting to see what happens to the game’s availability in the future.