Ghostwire Tokyo is the latest game from Tango Gameworks, the studio behind The Evil Within. It’s directed by Kenji Kimura (Tekken, Soul Calibur) and horror legend Shinji Mikami, who worked on genre classics Resident Evil and Dino Crisis. Both these prominent individuals come from different backgrounds and that carries across into Ghostwire, which, despite being a solid and polished game worth your time, feels conflicted and unfocused throughout.

Ghostwire Tokyo starts in media res. It’s nighttime in the famous district of Shibuya in Tokyo, and a spirit named KK is looking for a body to inhabit in a hurry, when he spots Akito laying in the street. A supernatural fog barrier has been put up around the district, and anybody who touches the fog disappears. This is all explained very quickly, and it’s not long before you’re fighting your first Visitors, otherworldly shells of people who used to inhabit the city. They’re trying to kill you, but luckily, when KK jumps inside your body, you find you can suddenly fire elemental powers through your fingers via a technique called Ethereal Weaving.

After dispatching some bad guys and meeting their villainous leader called Hannya who is the cause of all the fog and evil goings on, you carry on your pre-supernatural goal of heading to the hospital to visit your sick sister. Hannya and your sister’s fates are intertwined, however, and it quickly becomes clear that the overarching goal of Ghostwire Tokyo is to defeat Hannya and rescue your sister – which is, conveniently, pretty much the same as KK’s.

But that is only the main quest, and Ghostwire is an open-world game. At first, exploring Tokyo’s Shibuya district is novel and interesting. With a lifelike atmosphere, it replicates real-world Japan well. Machines from arcades and restaurants shout Japanese down the street as you run past them, convenience stores leak jingles into the street, and clothes litter the world where people simply vanished from them. Finding a dog curled up next to a pram sans baby and its owner’s clothes nearby is enough to give you a pang of sympathy. 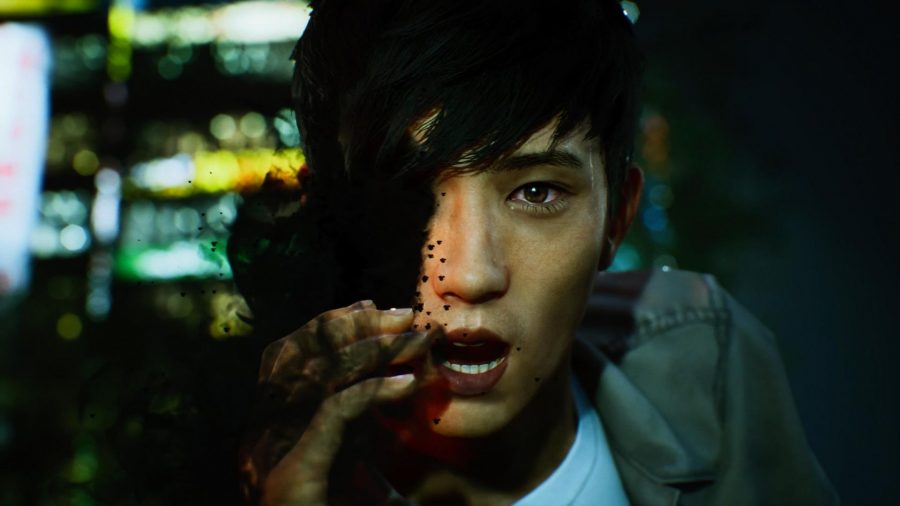 While this environmental storytelling works, this open world does not. Although you’re needed to pursue main quest missions, side missions, and other collectible objectives, you’re often interrupted by an area of harmful fog, which causes you to lose health on contact with it. It’s this that makes Ghostwire Tokyo feel less like a Japanese game and more like an Ubisoft one. Giant towers in the form of torii gates need to be cleansed in order to unlock nearby objectives and activities, forcing you to work your way through the map bit by bit in order to progress. It’s not what I expected to see in Ghostwire Tokyo, but I’m hardly surprised.

To go along with this open-world design is Ghostwire’s RPG-style system and combat. In order to progress your “synergy level”,” a representation of your bond with KK, which ultimately makes you more powerful, you have to collect floating spirits in a spiritual trinket called a katashiro. Delivering these spirits to telephone boxes around Shibuya transfers them back to their original bodies, giving you more XP in the process.

Ghostwire’s basic combat loop is repeated over and over, and you don’t get any new attacks or weapons after the first two hours. There are three different elements that you can shoot from your fingers, each one doing a different type of attack. Wind is quick and accurate like a pistol, fire is a heavy hitting rocket launcher, and water fires out in a shotgun-like spread. You can charge each attack for a heavier and wider attack. You can also attack enemies with a bog standard bow and arrow, but this isn’t very engaging.

Ghostwire also has a block mechanic, too, and blocking at the last second parries an enemy’s attack, leaving them open to your counter. Once you’ve damaged a Visitor enough, you’ll see a glowing core in their chest, which you can then hold a button to yank out, vanquishing them for good.

Once you gain another synergy level, you can choose to spend skill points upgrading some of these attacks, allowing you to shoot projectiles quicker or widen their damage radius. You can also gain the ability to recover ammo when parrying enemies, speed up the rate at which you yank out enemy cores, and more. 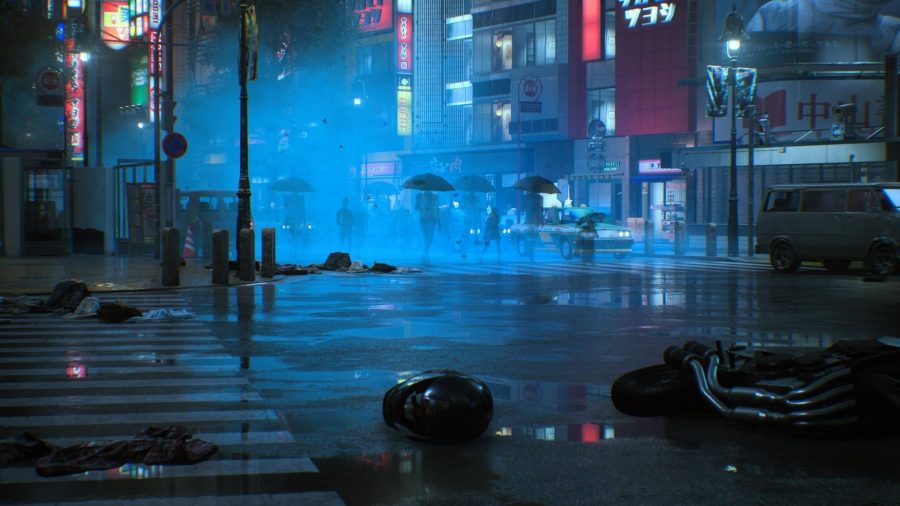 The enemies you’ll face aren’t exactly inspired, either. There’s your standard office workers with umbrellas, headless schoolboys and girls, police officers, a giant lady with an even more giant pair of scissors, and a couple of others. These models have slight variations in clothing or size, but beyond that, they’re all you’ll see during your playthrough, bar a few more unique bosses.

For all the RPG systems in place in Tango Gameworks latest title, you can actually just complete main quests exclusively and reach the end of the game with enough XP to take on the final boss without struggling. And if you do this, it will only take you ten hours. This is surprising considering the amount of filler quests in the main quest line; cleansing more torii gates to clear the fog to enable you to travel to the next quest marker, for example, or finding parts to get a vehicle up and running.

The game’s side missions are, perhaps, where you get a better feeling for the environments, and though their quality can range wildly, they do have more character than the main missions. Given to you by the city’s ghostly denizens, they might have you rescuing a yokai (a friendly creature from Japanese folklore), solving a mystery about a possessed doll, helping a tanuki find his friends, or cleansing the spirit of a samurai after his grave was built on by construction workers. Side missions are usually bite-sized and completed in just a few minutes, and while some of them flesh out the world with more bespoke stories, most of them are still there for open-world bloat. That spooky basement spirit will just be another giant woman with even more giant scissors.

The story is rushed, and nobody seems surprised to see ghosts, demons, and spirits in the streets of Tokyo

At no point are any of the enemies or locations scary, as much as they might sound it. I’m not ashamed to admit that The Evil Within had me peeking through my fingers or shrieking wildly in terror, whereas Ghostwire Tokyo failed to even get my heartrate up. It’s not a failed horror game because it was clearly designed to be an action-adventure, but it seems like a huge waste of potential when you have a master of survival horror like Mikami on the team.

Ghostwire’s premise – Shibuya’s inhabitants have disappeared due to supernatural fog – is also its downfall. Once you get over the excitement of running around a faithful rendition of Tokyo’s streets, you realise that there isn’t actually anyone to meet or talk to. You can pet dogs and cats, get missions from ghosts, and fight Visitors, but apart from that it’s an empty shell; a large map with nothing interesting to find. And that doesn’t inspire the desire to explore, which means that there isn’t any reason for Ghostwire to have an open world. 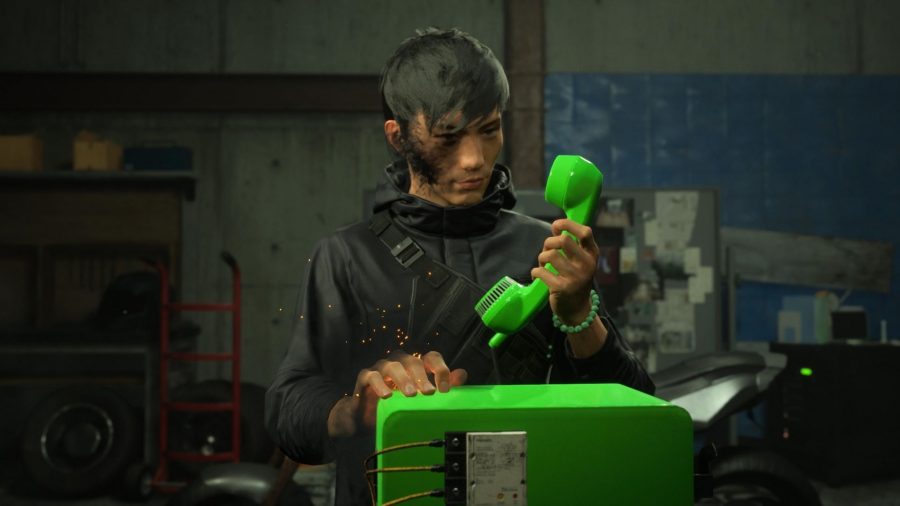 In fact, Ghostwire Tokyo as a whole feels unfocused, almost like it was a straightforward linear game that happened to have a large area, and then a higher-up came along and said, ‘Well, you built Shibuya for your narrative adventure, why not add lots of side missions and collectibles? Yeah, that’s what gamers love these days.’

The story is rushed, and nobody seems surprised to see ghosts, demons, and spirits in the streets of Tokyo. Dead people turn up to talk to you, then they disappear, and Akito doesn’t bat an eye. No time is taken to deal with the fact that everyone in Shibuya just vanished, and after rolling credits I’m still none the wiser on why or how the fog barrier got there in the first place.

In spite of all this, Ghostwire is a well-polished experience. The voice acting is superb, the chatter between KK and Akito as they go about their missions no matter how big or small shows that gameplay was developed with thoughtfulness. And there are flashes of what could have been, too, like when you get teleported to otherworldly places where things are upside down and the world is full of the supernatural. These are brilliant experiences that harken back to the studio’s spooky roots with titles like The Evil Within 2, but unfortunately, it’s not long before you’re transported back to Tokyo.

It’s not all bad, though. If you choose to suspend your disbelief at some of the unexplained narrative beats, the story is somewhat original, and you’ll certainly end up wanting to find out how everything is resolved, even if it doesn’t deliver the gut-punch of emotion that you might expect when all’s said and done. Combat, while simple, suffices, and even if Tokyo’s streets do have an aura of copy and paste after a while, it’s still a setting we don’t often see in games.

Ghostwire isn’t a bad game; it just doesn’t play to its strengths. Even with Japanese voice over, it feels like a game aimed at a Western audience. Even with a survival horror expert on-tap, they made a Ubisoft game and stamped Bethesda on it. It’s Assassin’s Creed without the scope or quest variance; it’s Far Cry but with only three finger guns and not real ones; it’s, frankly, not as good as Tango Gameworks’ other games.

An unfocused jaunt around Tokyo’s unnecessarily open world will provide for a solid way to while away the hours, but don’t expect the nail-biting survival-horror experience that Tango Gameworks is known for as you pound the pavement ticking off boxes.