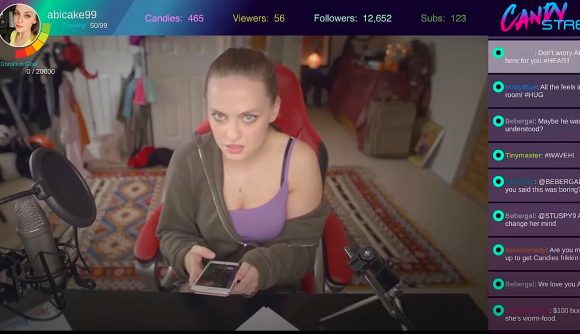 A new full motion video game from a small indie developer has caught the attention of the streaming community as it sees you play as the dedicated chat moderator of a female streamer.

Gamer Girl, created by Wales Interactive and FMV Future, puts you in the shoes of a moderator for an upcoming streamer called ‘Abicake99.’ While one premise of the game is to moderate her chat, ban any nuisance viewers, and help her make the right calls to grow her streaming career on a fictional platform, the other is a rather intense multi-branched, decision-driven story that attempts to “uncover the threat she faces by an anonymous predator who hides in the streamer’s chat,” according to a press release.

The trailer for the game, which you can watch below, shows your relationship with Abicake99 grow as you help her become a popular streamer and also shows snippets of the game’s bizarre narrative, including you partying with her, deciding whether she should answer unknown phone calls, and watching her enter a sinister looking house…

Wales Interactive, who specialise in FMV titles, also say that the game’s many real life scenes were entirely improvised by the actors playing the characters, with prewritten scripts of their Twitch chats and text messages as their only reference.

The studio claims the game – which has been four years in the making and has featured the input of “dozens” of female streamers – will have an “empowering” story.

Without giving away too much, Gamer Girl is an empowering story of a female streamer who, with the help of her moderator friend, battles the trolls and — overcomes— the toxic characters in her stream…

On Twitter, Wales Interactive says that it made the game with FMV Future was to address a number of prominent issues in the streaming industry. These include the “impact user comments and actions have on a streamer’s mental health” and “toxicity” within streaming communities.

However, the game’s announcement wasn’t well received. The official trailer has been removed from the official PlayStation Europe YouTube channel and there is no mention of the game on Wales Interactive’s website, although it is still present on FMV Future’s site.