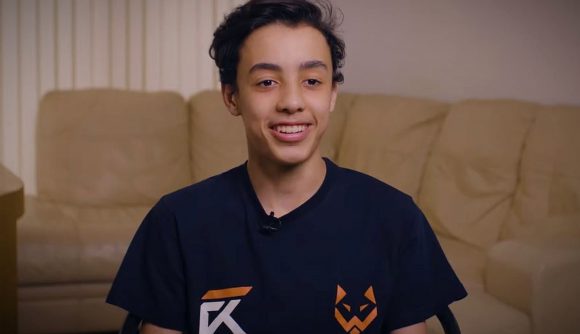 British Fortnite pro Jaden ‘Wolfiez’ Ashman has vented about a number of bugs in the game for controller players, saying it’s become so frustrating that it might be “worth” him switching to mouse and keyboard.

Wolfiez – widely considered to be one of the game’s top controller players – took to Twitter to have a rant about a number of bugs that make the game “fucking terrible” to play on controller. The Fornite World Cup Duos runner-up was specifically annoyed at the inventory bug (which has plagued the last few seasons of Fortnite in a variety of forms) and an aim assist bug.

While controller aim assist has been a hot topic recently in competitive Fortnite, efforts have been made by Epic to balance it to appease the mouse and keyboard community who felt at a disadvantage when challenging controller players in gunfights. While this seems to have improved aim assist from a balance perspective, it has also left it with a frustrating glitch whereby removing the visual crosshair from your screen can also remove all aim assist.

“I think it’s worth [it] to switch,” Wolfiez says on Twitter, suggesting he could be looking to make the jump to mouse and keyboard. “Controller is fucking terrible, the amount of bugs controller have is soooo stupid. Inventory bug/ you see a fucking crosshair on the screen and if you remove it you literally lose aimassist LMFAO. Cba with this.”

I think its worth to switch. Controller is fucking terrible, the amount of bugs controller have is soooo stupid. Inventory bug/ you see a fucking crosshair on the screen and if you remove it you literally lose aimassist LMFAO. Cba with this

While it’s pretty unlikely that Wolfiez, who has always competed on controller, will actually make the switch to mouse and keyboard, his concerns with controller bugs are valid.

The 16-year-old, who signed with UK-based organisation Excel earlier this year, continues to be one of the most popular and talented young Fortnite pros around right now. He’ll be hoping that he’ll be able to get back to slaying without the fear of these annoying glitches soon.