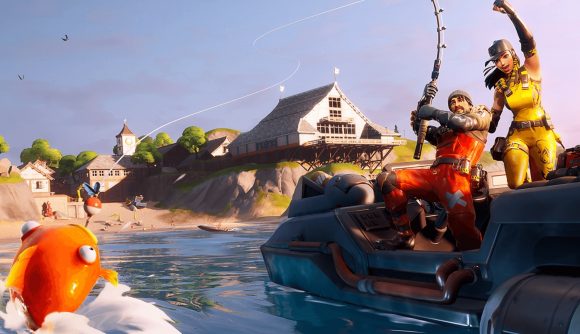 Fortnite Chapter 2 is live! Players around the globe rejoice as we no longer have to stare at a tiny black hole for hours on end.

After the dramatic finale to Season 10 (and the original Fortnite island), we were all expecting big things for the next season and the new map. However, no one was expecting the awesome way in which Epic have introduced us to our new battleground. On loading up Season 1 of Chapter 2 for the first time, a cinematic cutscene plays, showing off the new island and teasing some new features. It concludes with Fortnite character Jonesy diving out of the back of the battle bus and fades to white, but then immediately puts you in Jonesy’s shoes dropping into the new island, throwing you into your first game straight away.

The iconic moment has produced some incredible reactions from streamers as this was a complete surprise to everyone.  Let’s take a look at how some of the biggest names on Twitch reacted to the start of Chapter 2.

Please note that due to the sheer awesomeness of the reveal, there are some instances of strong language used by some over-excited streamers.

Turner ‘Tfue’ Tenney couldn’t believe what he was seeing when he was thrown into his first game and was left virtually speechless.

Jack ‘CouRage’ Dunlop was equally as excited, exclaiming: “What? It drops you right in! Yo, what is going on? Holy s***!”

While extremely pumped to be thrown straight into Chapter 2, Ali ‘Myth’ Kabbani seemed to enjoy the soundtrack to your first drop even more.

And finally, Tim ‘TimTheTatman’ Betar was a little late to the party, resulting in him scrambling to get his facecam on while he was dropping in for the first time in this hilarious clip.

The Fortnite hype is certainly alive thanks to Epic’s incredible introduction to the new map. With boats, swimming and fishing being added to the game, there’s not only a new map to explore but some completely fresh mechanics too. It’s going to be a fun season.