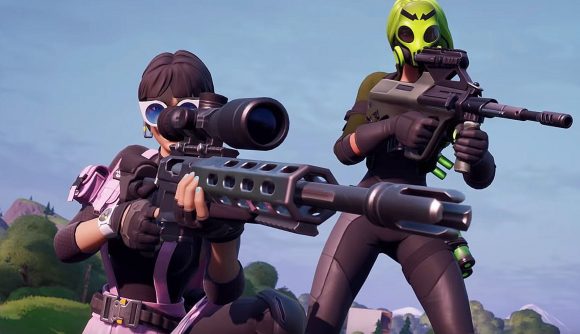 Of all of Fortnite’s crazy mechanics, rocket riding has always been one that not only produces hilarious moments but is also used as a legitimate strategy.

However, one Fortnite player has discovered that it isn’t just rockets that can send you soaring across the map. Completely by accident, Reddit user ‘Nonxgaming’ managed to hitch a ride on his teammate’s sniper bullet. That’s right, a sniper bullet. The chances of actually replicating this are very slim but this completely coincidental occurrence shows that is in fact possible to be transported around with a sniper shot.

In the clip Nonxgaming posted, the teammate that is off screen to his left fires a round in his direction as he is jumping. The player receives a hit marker animation in the direction of his teammate – but takes no damage as it is friendly fire – and is propelled at a ridiculous speed off to his right, eventually being halted by a tree.

I rode on my friends sniper bullet from r/FortNiteBR

The sniper shot ride, which was immensely faster than a typical rocket ride, saw Nonxgaming travel a relatively large distance in a blink of an eye, with the bullet taking him from just outside of Salty Springs all the way to inside Weeping Woods.

If you could perfect the timing of this incredibly difficult technique, this could quite easily transport you across a fair portion of the map in a matter of seconds.

So next time you see two members of the same team seemingly trying to snipe each other, remember that they might just be trying to get some speedy travel around the new Fortnite island.