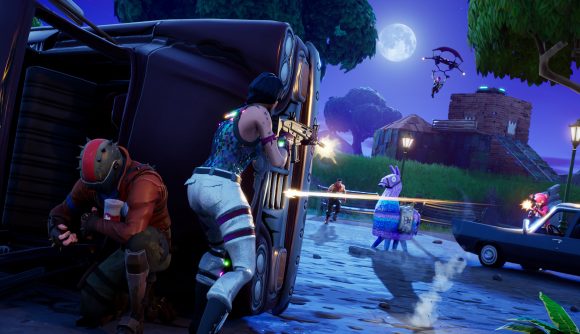 Competitive Fortnite players beware. Epic Games is cracking down on excessive jumping, emoting, toy tossing, and pick-axe swinging to prevent players from communicating with each other in game.

The publisher says its anti-cheat team investigated a number of instances of collusion last year where players used signals and movement in game to communicate messages, so the company has decided to prohibit “any kind of in game communication” this season to crack down on cheating.

In a blog post, Epic Games says it will hand out teaming and collusion penalties for any players or teams found to be using excessive pick-axe swinging, emoting, toy tossing, or jumping in order to communicate. The developer has made it clear that pacifism-style gameplay is still allowed, though.

However,  Tyler ‘Ninja’ Blevins has hit back at Epic’s decision, calling it “problematic.” The Mixer streamer says he understand where Epic is coming from but actions like jumping help players live longer by dodging bullets. Many players also switch to their pick-axe by force of habit.

I can see where epic is coming from, as a spectator seeing teams and players rotating and not shooting and swinging pick axes can seem odd but with no rotation items at all professional players understand when the time to fight actually is. Also, jumping? Best way to dodge snipes pic.twitter.com/NenfqxdK12

However, Epic has also made it clear that action will only be taken following a review. So, contrary to popular belief, you can still jump in official tournament matches – as long as it’s not related to signalling.