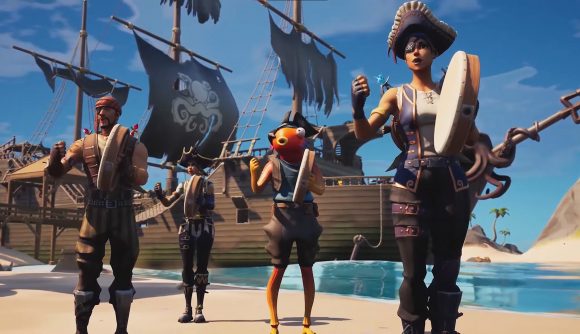 The spirit of the sea shanty TikTok trend lives on, with Fortnite developer Epic Games announcing a new emote based on hit tune ‘Wellerman’. The ‘Shanty for a Squad’ emote was added to the game’s item shop last night, March 3, and is priced at 500 V-Bucks.

Although it may sound like the original, Fortnite’s take on Wellerman has some cleverly-scribed lyrics relating to elements of the hit battle royale game. Take the chorus for example: “See there the storm she come / To whittle us down and leave just one / Grab your squad quick on the run / Let’s take our dub and go.” While it perhaps doesn’t quite flow as well as the original, we’re pretty impressed by the effort.

Similarly to the ‘Sing Along’ Christmas emote, which saw players spread seasonal cheer through the medium of carolling, if multiple squad members own the emote, they harmonise. As such, if you want to get the full experience, then you’ll have to jump into squads.

🎶One day, when the squaddin' is done,
We'll take our dub and go 🎶

Gather round the Item Shop and grab the Shanty for a Squad Emote inspired by @NathanEvanss and #shantyTok! pic.twitter.com/9UCAh531cw

Fortnite Season 2 Chapter 5 is set to end on March 15, and has been filled to the brim with pop culture crossovers. Indeed, Shanty for a Squad is but a drop in the ocean when you have the Mandalorian, Green Arrow, and a Xenomorph all dropping in.