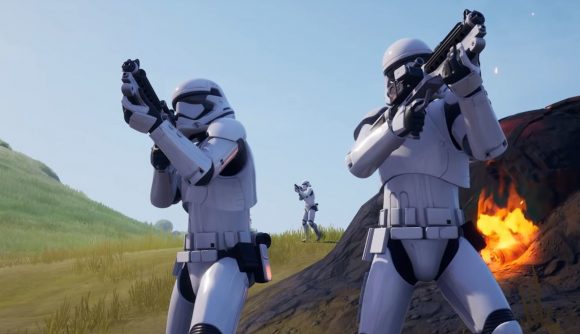 Luke Skywalker once said “you want the impossible” and it’s finally happened. Tyler ‘Ninja’ Blevins is teaming up with the real Luke Skywalker, aka Mark Hamill, to show off the new The Rise of Skywalker update for Fortnite.

Epic Games’ battle royale is no stranger to showcasing items relating to new films, and with Stormtroopers and Star Wars themed skins appearing in Fortnite, it looks like the Xbox Sessions stream tomorrow is set to take us to a galaxy far, far away.

Xbox Sessions, which is usually streamed on Xbox’s Mixer channel and posted on YouTube, allows celebrities to join streamers in showcasing games and updates to a wider audience. John Boyega got to grips with the new Battlefront II update earlier this week on the channel, in what appears to be a Star Wars related marketing push by Microsoft ahead of the films release this week.

The exact time for the stream with Ninja hasn’t yet been announced, but expect to see Hamill get well acquainted with the lightsaber at Salty Springs and Lazy Lake when it all kicks off tomorrow.

Christmas wish in 3, 2, 1… Wait until you see what @Ninja and I have planned with @FortniteGame and @Xbox on Thursday. It’s going to be….Amazing! (and I’ll try not to make a fool of myself) #XboxPartner pic.twitter.com/A9SddlqV4S

Star Wars: Episode IX – The Rise of Skywalker also hits cinemas tomorrow in the UK and Friday (December 20) in the US.