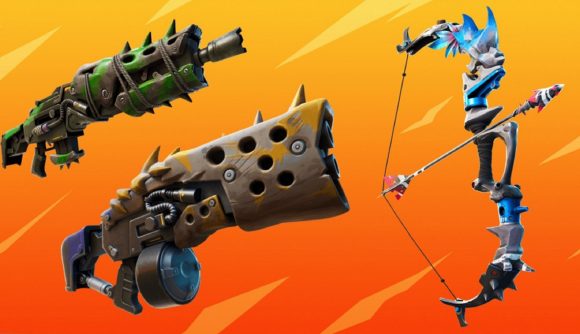 The first patch for Fortnite Chapter 2 Season 6 has dropped, and the changes should make crafting easier, and the Primal Shotgun less powerful. This season has made a lot of changes to the game, and clearly some of them were a little broken.

The latest Fortnite season took things back to basics, introducing untamed wildlife such as wolves and chickens – which are completely broken, by the way – to the battle royale game and adding an entire crafting tab in players’ inventories. Through a combination of taking down 30-50 feral hogs (okay, more like three to five, but you get the picture) and finding a Makeshift weapon can net you a high-level weapon early in the game.

With Fortnite’s vastly reduced loot pool this season, crafting a Primal Shotgun in the first throes of battle can set you up for the entire game – especially if you grab one of a high rarity. It works very similarly to the old Drum Shotgun – which was very, very good – and is a great weapon to keep in your inventory if you want to win matches. Crafting one isn’t too complicated, but to get to grips with the system we recommend checking out our list of Fortnite’s best weapons, which covers crafting in full.

As well as reducing the fire rate of the Primal Shotgun, however, the crafting system has changed slightly in the patch. As we all know, upgrading a Makeshift weapon to either a Primal or Mechanical weapon increases its rarity by one stage, which is why the system is so good. But now, it will cost you more crafting materials (that’s Animal Bones or Mechanical Parts) to upgrade a Makeshift weapon, the rarer it is.

To offset this increased cost to get your hands on a Pump or Drum – sorry, Primal – Shotgun of reasonable rarity, these crafting materials will now be appearing as floor loot so you don’t have to take a hunting trip before sitting down to craft.

The last addition is a “new apex predator” on the Fortnite island, symbolised with an egg. Dinosaur? Jurassic Park crossover? Giant chicken? Who knows at this point.