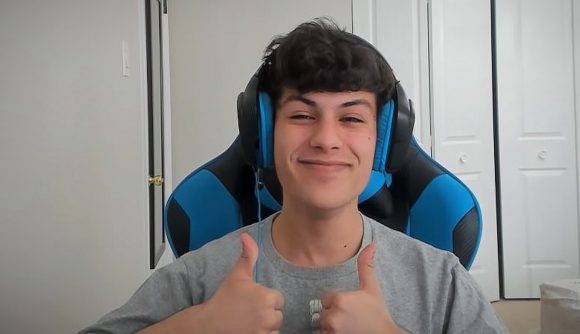 NRG continues to double-down on becoming the dominant force in competitive Fortnite after signing its seventh big-name pro player in ‘Ronaldo.’

The American joins NRG’s ever-growing roster of Fortnite pros after becoming an increasingly popular figure in the pro community thanks to his streams of both his own competitive matches and viewing parties for Fornite esports events. While his presence on Twitch is likely a big reason he has signed to NRG – who boasted last month that it was the most watched organisation on the platform – he is not without decent competitive success. Along with now NRG teammate Dominick ‘Unknown’ Green, ‘KEZ,’ and ‘Avery,’ Ronaldo claimed the Season 2: Chapter 1 Fortnite Champion Series title in his region.

A montage of insane plays and clips from his unique style of streaming was mashed together for his announcement video. Unfortunately, he didn’t get the Shaq treatment like previous NRG signing Cody ‘Clix’ Conrod. Over 68,000 tuned in to watch Ronaldo’s announcement during a livestream, according to Twitch Tracker.

The signing of Ronaldo further bolsters NRG’s already massive presence in both the competitive Fortnite space and the streaming space.

The organisation’s small army of Fortnite pros include the likes of Clix, Unknown, Benjy ‘Benjyfishy’ Fish, and Williams ‘Zayt’ Aubin.