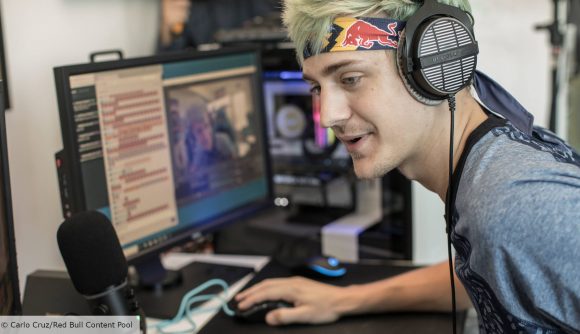 Like most Fortnite players on PC, Tyler ‘Ninja’ Blevins is sick of aim assist, but there’s nothing he can do. The Mixer streamer, who uses a keyboard and mouse to play the game, says controller players need to be honest with Epic Games about aim assist to push for a balanced change for everyone.

Despite being nerfed only a few weeks ago, aim assist is still under the spotlight on PC. The feature seems to be fairly balanced on console, but on PC it’s a different story. PC lobbies are dominated by controller players nowadays and the feature, which has been likened to an aimbot on multiple occasions by different streamers, needs to change.

“I can’t do anything, I don’t use it,” Ninja says in his latest video, which you can watch below. “It’s going to be up to credible top competitive controller players who have a huge influence to reach out to Epic and be vocal and honest about it if we as a unit want it to be more balanced.

“Controller aim assist is performing way better than it does on Xbox or Playstation. People have to be vocal about it – especially the players who use it. If we get more people speaking up and being honest about it, I think we can get a nerf or a change and make it more balanced and healthy.”

Bunch of Fortnite gamers talking about controller aim assist (on pc not console), wanted to leave my 2 cents. Please watch the whole video before commenting or leaving hate. pic.twitter.com/MnuCAF4Ju9

This is something Aydan ‘Aydan’ Conrad agrees with. The pro player, who’s currently playing on controller, says aim assist “is too strong right now” and Epic Games is using the feature as a way of putting console players on a level playing field as PC players.

While the last update was a step in the right direction, the results of the latest FNCS Invitational suggests more needs to be done to level out the playing field in Fortnite.